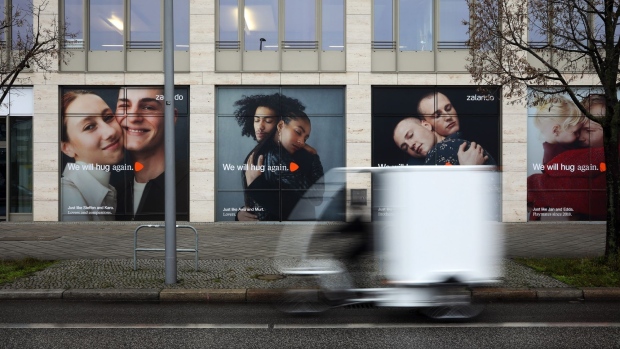 Billboard adverts for Zalando SE in Berlin, Germany, on Monday, Jan. 4, 2021. Germany is poised to extend stricter lockdown measures beyond Jan. 10 amid criticism over alleged failures in the government’s fledgling vaccination program. , Bloomberg

The stock dropped as much as 17% in early German trading. It’s fallen about 70% this year.

The retailer said late Thursday that it expects full-year adjusted earnings of 180 million euros ($190 million) to 260 million euros, well below previous guidance in May of 430 million euros to 510 million euros. The second quarter is still profitable, but weaker than expected, Zalando said.

While sales for online retailers boomed during lockdowns, when people were forced to shop online, that growth has since cooled as normal shopping patterns return. Record euro-zone inflation is also hitting consumer confidence.

“After some promising signs of improving consumer demand between the end of April and May things seem to have deteriorated significantly in June,” said Guido Lucarelli, an analyst at Citigroup, adding that he didn’t see much hope for a recovery in the second half, “and possibly neither in the first half of 2023.”

Zalando has been expanding aggressively. Last year, when online sales were booming, it set out a plan to corner a 10th of Europe’s fashion market -- estimated to be worth 450 billion euros in the long term.