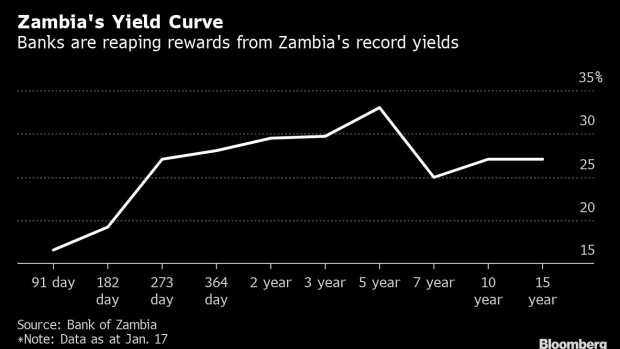 Zambia’s government debt is yielding as much as 33% thanks to a widening budget deficit, and there’s one clear winner: local banks, which are reaping record profits.

Standard Bank Group Ltd.’s Zambian unit earned more in the country in 2019 than any lender ever has, according to a statement by the company, Stanbic Bank Zambia Ltd. That’s partially due to rising interest income from holdings of government securities, and in a year when the economy was growing at about 2%, the slowest pace in more than two decades.

“It’s one of the best deals, really,” Leonard Mwanza, chief executive officer of the Bankers Association of Zambia, said in an interview in Lusaka, the capital. The only underlying risk would be for companies converting kwacha earnings into foreign currencies, he said. The Zambian currency has weakened 18% against the dollar in the past 12 months.

Stanbic posted profit before tax and costs of 1.72 billion kwacha ($117 million) last year, with 64% of that attributable to interest income. Net income leaped 96% to 449 million kwacha.

The southern African nation’s budget shortfall widened to 8.2% of gross domestic product on a cash basis last year, missing the 6.5% target, according to finance minister Bwalya Ng’andu. During the same period, external debt rose to a record $11.2 billion from $10 billion a year earlier, while local-currency debt rose to 80.2 billion kwacha from 58.3 billion at end-2018.

The increased issuance from government has been driving up yields, according to Mwanza.

“When you talk of the yields, both on the treasury bills and the bonds, it emanates from the fiscal side,” he said. “It speaks to the appetite from the government to raise sufficient revenue to cover their outflows.”

Yields on benchmark one-year government treasury bills are more than double the annual inflation rate of 12.5% in January, giving investors a real return far above other asset classes.

--With assistance from Taonga Clifford Mitimingi.

To contact the reporters on this story: Matthew Hill in Maputo at mhill58@bloomberg.net;Gordon Bell in Johannesburg at gbell16@bloomberg.net

To contact the editors responsible for this story: Antony Sguazzin at asguazzin@bloomberg.net, Robert Brand, John Viljoen