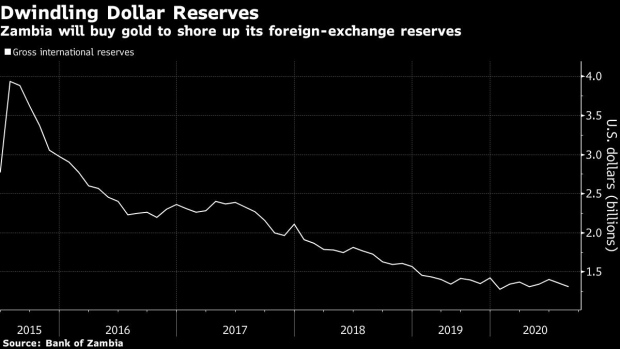 Zambia, which last month became Africa’s first pandemic-era default, plans to hold gold for the first time since 1995 to bolster foreign-exchange reserves that have dwindled near record lows.

The central bank on Friday signed gold-purchase deals with a local unit of First Quantum Minerals Ltd., which produces the precious metal as a by-product at its Kansanshi copper mine in the southern African nation. It also signed a deal with a state-owned mining investment company that in turn buys gold from small-scale producers and owns a small mine.

Zambia’s foreign-exchange reserves plunged in recent years as the government struggled to service its rapidly rising foreign debt, and output of copper that it depends on for about 70% of export earnings stagnated. Reserves slid to $1.31 billion in August, barely enough to cover three months of imports. The kwacha has lost a third of its value against the dollar since the start of 2020, helping to spur inflation to a four-year high in November

“Gold has long been a long-term store of value, especially during periods of high inflation,” central bank Governor Christopher Mvunga told reporters at a signing ceremony in Lusaka, the capital. “During periods of market stress — when traditional assets would be losing value — gold would be adding value, thereby shielding the whole portfolio from large losses.”

The Bank of Zambia will buy all the gold from First Quantum’s Kansanshi mine, which produced 145,386 ounces in 2019, according to Isaac Muhanga, a director at the bank. It will pay market prices for the bullion, in local currency.

Zambia had to sell its gold reserves about 25 years ago because of dollar shortages after decades of nationalization and slumping copper prices. At the time, the economy was also straining under unsustainable external debt and rampant inflation. Back then, an ounce of gold was worth less than $400. Today, it’s trading at more than $1,830 an ounce.