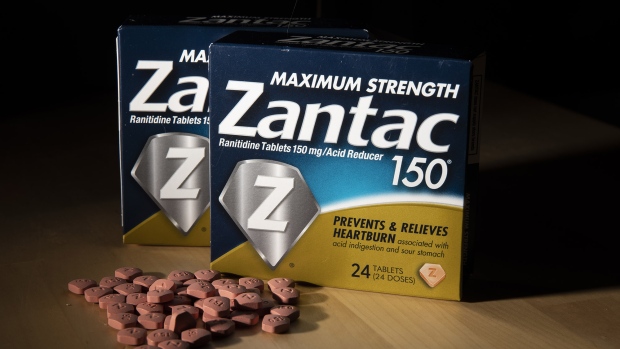 (Bloomberg) -- GlaxoSmithKline Plc, the original branded maker of Zantac, halted global distribution of the popular stomach medicine, adding momentum to actions aimed at stopping access to drugs that are tainted with a potential human carcinogen.

Glaxo will also recall the drug in India, where it’s known as Zinetac, and Hong Kong. The recalled medicine is made with an active ingredient from two India-based suppliers, Dr. Reddy’s Laboratories Ltd. and Saraca Laboratories Ltd., Kristen Neese, a spokeswoman for Glaxo, said in an email Wednesday. Dr. Reddy’s is FDA-approved to sell its own finished versions of prescription and over-the-counter generic Zantac in the U.S.

A recall means drugs must come off of pharmacy shelves, while a distribution halt means the company is no longer supplying the drugs, though typically those already on shelves can be sold.

Novartis AG’s Sandoz unit recalled its generic version of the drug, called ranitidine, on Tuesday, confirming levels of the carcinogen at worrisome levels. Dr. Reddy’s, one of India’s largest generic drugmakers, said last week it was suspending all distribution of ranitidine. Sandoz has already halted global distribution of generic Zantac.

The carcinogen detected is called NDMA. Since last year, the U.S. Food and Drug administration has been overseeing a recall of a type of generic blood-pressure pills that originated in China and India and were also contaminated with NDMA.

Glaxo first won U.S. Food and Drug Administration approval for Zantac in 1983, though later discontinued it, according to the agency’s website. About two dozen generic drugmakers have since gained FDA approval to sell their own versions of Zantac. Glaxo declined to name the countries where it distributes Zantac. Neese said the company doesn’t sell or manufacture Zantac in the U.S. but declined to name other countries where it does.

French drug giant Sanofi won approval beginning in 1995 to sell the branded Zantac without a prescription. Sanofi has halted distribution in Canada, where health officials required such a move, but doesn’t have any plans to stop distributing Zantac elsewhere, Ashleigh Koss, a spokeswoman for the company, said in an email.

The FDA put out a statement Tuesday evening about Sandoz’s recall but Jeremy Kahn, an agency spokesman, declined to share the levels of carcinogen detected in the products.

“Our testing of ranitidine products is ongoing and we will take appropriate measures based on the results of the investigation,” Kahn said in an email.

The FDA investigation came after online pharmacy Valisure, which tests all medications that it distributes to customers, detected NDMA in brand-name and generic versions of Zantac. Some versions of the drug are available only with a prescription while others can be bought over the counter.

In the meantime, the Italian Drug Agency said last week it was ordering a recall of all versions of Zantac made with active ingredient from Saraca, the the Indian manufacturer. Italian regulators also banned the use of some types of Zantac produced by other pharmaceutical companies pending analysis of the drugs.

Germany’s drug regulator indicated last week that there were wider recalls of ranitidine made with active ingredient from Saraca in Europe.

To contact the reporter on this story: Anna Edney in Washington at aedney@bloomberg.net