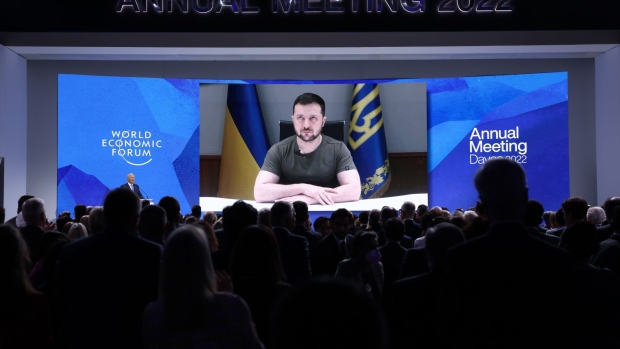 Volodymyr Zelenskiy delivers an address on the opening day of the World Economic Forum in Davos, on May 23. Photographer: Hollie Adams/Bloomberg , Bloomberg

(Bloomberg) -- Ukrainian President Volodymyr Zelenskiy said Russia’s economy should be shut off from the world and invited global investors to shift resources into Ukraine to help rebuild the country from the devastation wrought by Vladimir Putin’s war.

“This is really the moment when it is decided whether brute force will rule the world,” the Ukrainian leader said in a keynote address at the World Economic Forum in Davos, Switzerland, on Monday. If force does win out, “there is no need for further meetings in Davos,” he said.

Nearly three months after Russia began laying waste to Ukraine’s economy and infrastructure, the country on the eastern border of NATO and the European Union is a dominant topic at this year’s WEF. Along with Zelenskiy’s speech, Foreign Minister Dmytro Kuleba and Kyiv Mayor Vitaly Klitschko are taking part in many of the official events.

Zelenskiy said nations should set a precedent by preemptively imposing sanctions against potential aggressors. He demanded they shut off all trade with Moscow with measures including a full ban on buying its oil and gas, restrictions on all Russian banks and a “complete withdrawal of all businesses.”

Resources should be redeployed to Ukraine as part of a rebuilding project on a scale of the U.S.-backed investment in Europe after World War II, Zelenskiy said, quoting George C. Marshall, whose plan laid the foundation of the continent’s recovery.

“You will access not only a market of 40 million consumers, but also to the EU market,” Zelenskiy said.

As Russian forces make some advances in eastern and southern Ukraine, Zelenskiy said on Sunday that as many as 100 soldiers were dying each day in some of the most severe battles. Putin’s military has intensified its efforts to encircle Ukrainian troops after seizing the port city of Mariupol after weeks of intense fighting.

The WEF gathering in the Swiss resort town was the first since the fall of communism without a single Russian official or business leader. Ukrainian officials in Davos, including a group of mayors, on Monday launched an exhibit of photos and video showing alleged war crimes committed by Russian troops.

The site of the exhibit was particularly poignant -- the building usually occupied by “Russia House” at the WEF, but now dubbed “Russian War Crimes House.”

Speaking at the exhibition launch by video address, Zelenskiy aide Andriy Yermak said the exhibit, which features 4,600 pieces of evidence, was not just a symbolic move. “It is honest,” he said. “It is fair.”

The exhibit was arranged by the Victor Pinchuk Foundation, a philanthropic group named after its tycoon backer. Speaking at the launch, Pinchuk said modern technology was permitting much faster assessments of potential war crimes by Russia than in previous conflicts, including the photographic evidence. “Maybe this will stop them,” he said.

In addition to the exclusion of Russia, Zelenskiy’s keynote offered a powerful contrast to his last appearance in 2020, when he made a pitch to lure investors by offering assistance -- via “investment nannies” -- for those willing to bring $30 million or more to Ukraine.