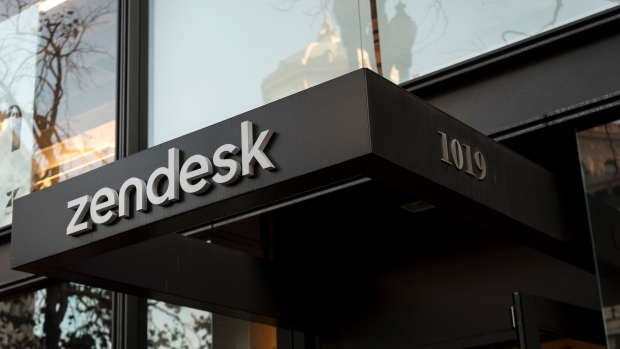 Signage is displayed at Zendesk Inc. headquarters in San Francisco, California, U.S., on Wednesday, Oct. 2, 2019. Zendesk fell 5.6% yesterday as its sector declined. Trading in the company's put options was double the average. , Bloomberg

(Bloomberg) -- Zendesk Inc. shareholders are expected on Friday to reject its proposed takeover of SurveyMonkey’s parent company, Momentive Global Inc., effectively killing the deal, according to people familiar with the matter.

The proposed takeover has come up against stiff opposition from shareholders in both software companies who questioned the merits of the deal. Momentive is expected to have garnered the necessary majority support from shareholders to proceed with the deal, the people said, asking not to be identified because the matter is private.

The transaction required the support from both Zendesk and Momentive investors. Zendesk’s expected failure to secure that support at a shareholder meeting slated for Friday is expected to result in its takeover plans being terminated, the people said.

Zendesk agreed to buy Momentive in October in an all-stock deal valued at roughly $4 billion at the time. The news was followed by a sell off in the shares of both companies as investors questioned the strategic rationale for the deal. The transaction is currently valued at $3.8 billion.

The deal has come up against stiff opposition from activist investors in both Zendesk and Momentive. Legion Partners Asset Management is prepared to nominate three directors to the board of Momentive because it believes the company’s board breached its fiduciary duties by agreeing to the terms, Bloomberg News reported this month.

Zendesk has its own activist to deal with. Jana Partners has nominated four directors to its board. The New York hedge fund has questioned the rationale for the deal and argued in a letter to the company’s board this month that it should abandon its pursuit of Momentive and instead engage with potential buyers.

Zendesk received a takeover proposal from a consortium of private equity firms that includes Hellman & Friedman, Advent International Corp. and Permira, people familiar with the matter said this month. The company has acknowledged it received the proposal -- without identifying the bidders -- and said it rejected it because it undervalues the company.