They’re the kind of exotic mortgages that one typically associates with the reckless, go-go housing market that gripped the U.S., circa 2005: Put down 5 per cent cash and get 3 per cent back; or, wilder yet, put down nothing at all. So when these products -- and others like them -- started popping up in the normally cautious Canadian financial industry, it raised alarm among policy makers in Ottawa.

This is year twenty-five of the great Canadian housing bull market, a nearly uninterrupted straight line up that has few parallels in the world. At a time of soaring real-estate prices all over the globe, only one major economy -- New Zealand -- has a frothier housing market than Canada, according to an analysis by Bloomberg Economics. And after all those years of price gains, including a 21 per cent surge since the pandemic began, millions of middle-class Canadians have no chance of scrounging together the money needed to make a conventional down payment of 20 per cent.

In Whitby, a booming Toronto suburb nestled against the banks of Lake Ontario, this is a lament that mortgage broker Sherry Corbitt hears constantly from first-time home buyers. More than half of them, she says, are opting for loans that either allow them to borrow the money for their down payment or that provide cash back after the closing. A year ago, these products made up a small fraction of her business.

Asked whether this worries her at all, Corbitt, who works with some of Canada’s biggest banks, whips out a statistic she’s proud of: In her 13 years in the industry, not a single client has defaulted. “We’re never going to see what happened in the States,” she declares. “It’s just not possible here.”

Perhaps. The Canadian housing market has defied gravity for so long that the vast bulk of outspoken bears and Cassandras have fallen silent after years of erroneously calling for an imminent collapse. In some circles, in fact, the opposite concern has begun to emerge -- that prices will inexorably grind higher, year after year, deepening inequality and sucking up ever-greater quantities of capital and labor that could be used more productively in other sectors of the economy.

And yet, the boom in riskier loans has begun to chip away at the most crucial of the three pillars that industry insiders cite over and over as the solid foundation on which the housing rally is built: conventional, conservative lending practices. (Rising demand and tight supply are the other two.)

Canada may still have a raft of regulations that prevents the riskiest of applicants -- those who fell into the subprime category in the U.S. in the aughts -- from ever getting a mortgage, but many of those who are approved for loans today are taking on debt loads that were once unthinkable.

Tiff Macklem, the governor of the Bank of Canada, and his staff have started to publicly express concern. In the bank’s annual Financial System Review, released in May, policy makers signaled the risks posed by a deterioration in the quality of home loans.

They pointed to borrowers financing bigger chunks of their purchases as a primary concern. This is “the most economically significant factor associated with future financial stress,” the report said.

Often these massive loans are being taken out by borrowers with relatively low incomes. Mortgages considered to have a high loan-to-income ratio -- when the principal is at least 4.5 times the borrower’s annual income -- accounted for about 17 per cent of new insured home loans in the fourth quarter. Two years earlier, they made up just 6.5 per cent.

A separate Bank of Canada survey of loan officers showed they have loosened mortgage lending conditions in each of the past three quarters. 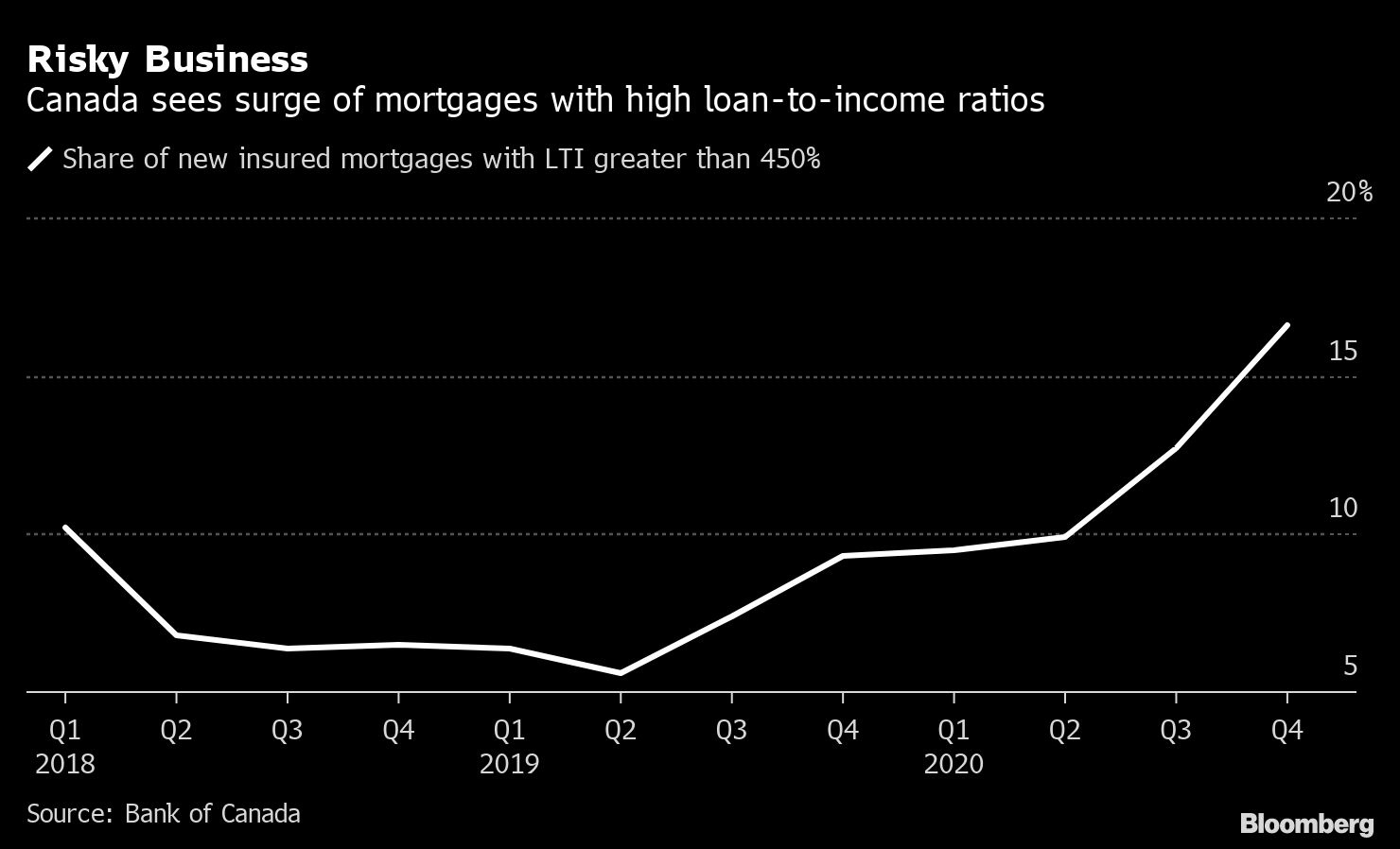 For Macklem, the angst is compounded by the prospect of rising inflation and higher benchmark interest rates, which would quickly drive up borrowing costs for millions of homeowners in a country where, unlike in the U.S., most borrowers have mortgages on which the rate is reset every five years or less.

Under Macklem’s guidance, the central bank has been among the first central banks in the developed world to pare back the monetary stimulus injected into the economy at the outset of the pandemic. Traders now expect the bank to begin lifting its benchmark rate from 0.25 per cent over the next 12 months, and to raise it three more times in the two years after that.

David Rosenberg, one of the few Canadian real-estate bears still expressing his views publicly, says Macklem has latched onto a key concern. Rosenberg thinks the first of the rate hikes may come even sooner than markets are predicting, given how high inflation is, and that this could wind up pushing down housing prices and triggering a cascade of defaults. (So far, mortgage delinquencies remain at rock-bottom levels -- about 0.25 per cent.)

“When you look at loan-to-value ratios, it doesn’t take much to tip the balance to negative homeowner equity,” said Rosenberg, who runs Rosenberg Research & Associates Inc. in Toronto.

Rosenberg made his name in finance when, as chief North America economist for Merrill Lynch, he called the U.S. housing market a bubble two years before it burst. He liberally uses that term again now in reference to the Canadian market. “It is a massive bubble and an accident waiting to happen,” he said in an interview. 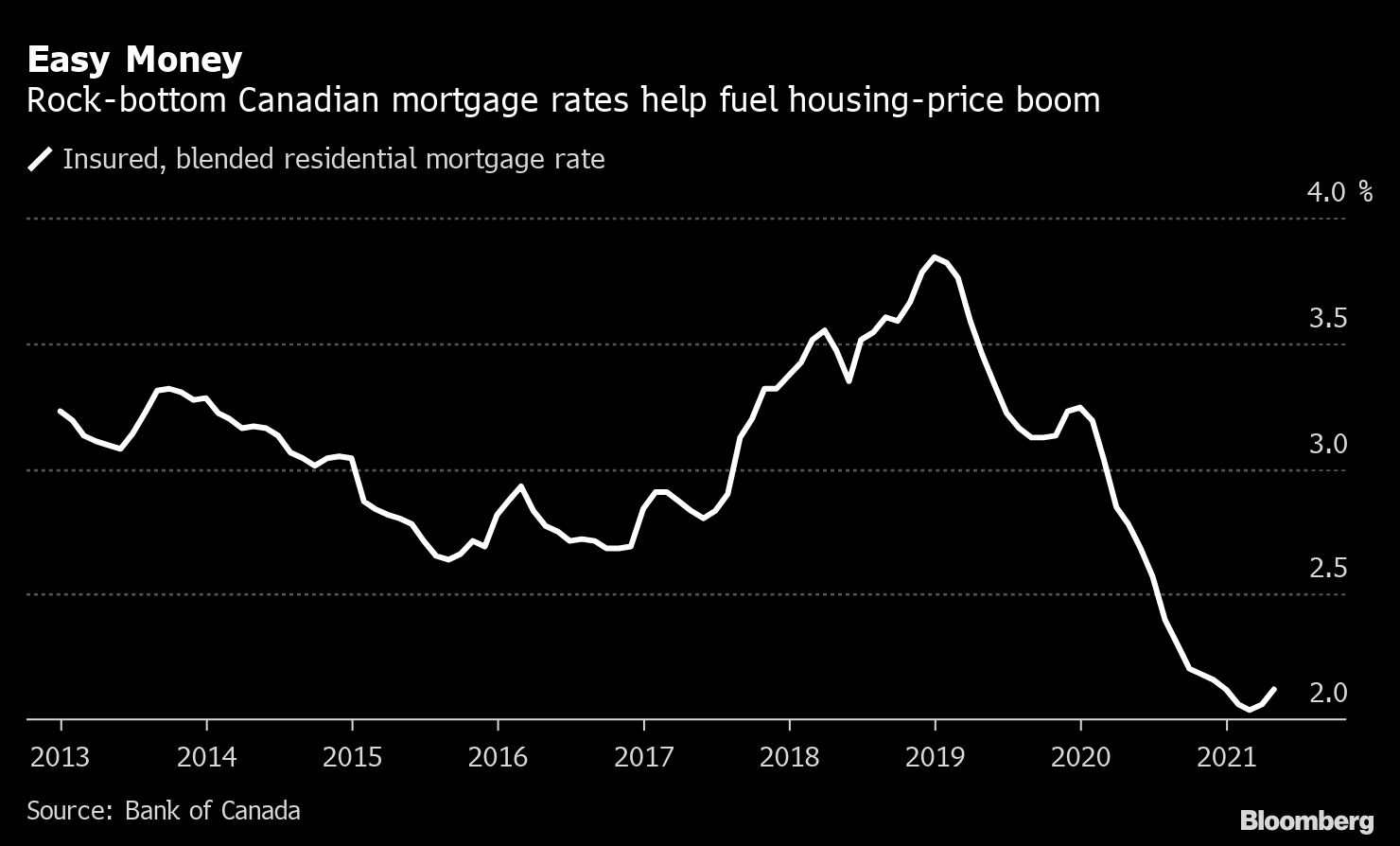 Popular with the global jet-setting crowd, the west coast city of Vancouver is the most expensive housing market in all of Canada. It is, as a result, also home to a great many of the country’s heavily indebted middle-class homeowners.

Josh Doornenbal is one of them.

It’s a staggering amount of debt -- nearly double the Bank of Canada’s threshold for identifying highly leveraged borrowers. Even for loan officers increasingly ready to take on risk, it was an unnerving sum. Doornenbal, 33, pledged the home’s basement rental suite as a source of income -- he figures it’ll pull in about $2,300 a month -- to bring down the debt ratio.

After many rejections, he found a credit union willing to green-light his loan application. Credit unions, which are provincially-regulated in Canada, are among those willing to underwrite some high-ratio mortgages, along with nonbank specialty lenders and major banks.

Terri Szego, a portfolio manager and investment adviser at Bank of Montreal, has another gauge to measure how stretched home buyers are: the number of her clients who call for advice on how to help their children make down payments. When she took the job 17 years ago, those conversations were exceedingly rare. They picked up about five years ago, she says, and then, around 2019, they suddenly became much more frequent.

Cash gifts typically range from $10,000 to $100,000 or more, Szego says. To her, that aid is often a sign that her clients’ kids are getting in over their heads. Like Macklem and Rosenberg, she frets about a rise in interest rates.

“What happens when these big prices have been paid, these big loans have been taken out and mortgage rates start to go up?” Szego says.

There are, of course, plenty of housing bulls who are unimpressed by these concerns.

Exotic products like zero-down mortgages, they note, remain a small percentage of all mortgages, and any home loan with less than 20 per cent down must be insured against default. That’s part of the reason why losses from bad mortgages have been minuscule at major Canadian banks in recent years.

What’s more, they argue the hand-wringing about the Josh Doornenbals of the world is misguided. Loan size isn’t as crucial a metric in determining future default rates as is the strength of the borrower’s future income, and by all accounts, Canadians’ paychecks are healthy and stable.

Back in the Toronto suburbs, Corbitt, the mortgage broker, is busier than ever.

Her business jumped 60 per cent last year and is on pace to surge another 20 per cent this year, she said. Much of this growth is coming from people who are getting pushed out of their rental homes by landlords who’ve decided to sell their properties amid the boom. Rather than hunt for a new rental in a suddenly fiercely competitive market -- bids pour in for properties as soon as they’re listed -- folks are opting to take the plunge and buy. This is what drove Doornenbal’s decision, too.

“Well if I have to be evicted,” Corbitt says clients tell her, “maybe now’s the time to buy.” It all feels a little rushed, she acknowledges. “A lot of first-time buyers are not ready.”