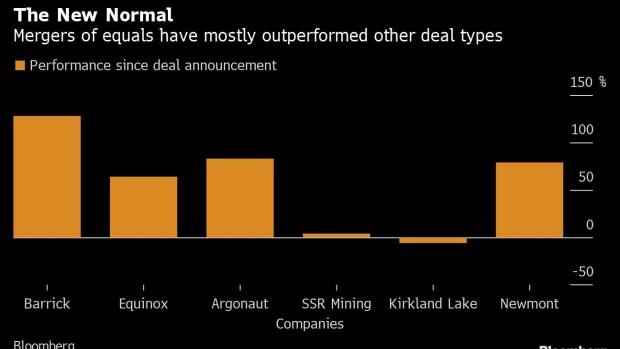 (Bloomberg) -- Gone are the days of paying high premiums to acquire mining companies or assets.

After going through a prolonged bear market since 2013, miners have become more composed, and in this new bullish gold cycle paying a zero premium to merge two companies may become the new normal.

Deal-making among gold miners has picked up since the precious metal’s latest rally began in mid-to-late 2018. However, unlike in past bull markets, miners have been more careful to do deals that consolidate assets to minimize costs and maximize shareholder returns.

Recent mergers of equals -- with no premium paid by the buyer -- suggest there isn’t a need for hundreds of different companies with multiple assets and management teams, said Dan Barnholden, PI Financial’s managing director and co-head of investment banking. Shareholders will applaud deals where executives put together very similar assets and cut corporate overhead, while creating bigger companies with increased liquidity, he said.

General and administrative costs “are too high” for individual miners, Barnholden said. “One of the points the institutional investors are making is that why can’t we consolidate these assets and lower G&A costs.”

Shares of Barrick, Equinox and Argonaut have surged at least 60% since announcing their deals, with Barrick up 128%. There have been other deals with premiums attached, such as Newmont Corp.’s acquisition of Goldcorp Inc., with about a 17% incentive, and Kirkland Lake Gold Ltd.’s purchase of Detour Gold Corp. with about a 24% premium. Yet the stocks’ performances haven’t been as eye popping, and Kirkland has underperformed peers.

Merger of equals can be profitable when the deal rationale is clear for the investors.

“You can’t just put any two companies together,” Barnholden said. “You have to look at these deals where the market will re-rate the merged company and that’s the biggest stumbling blocks for some.”

Take SSR Mining. The stock has been up about only about 4% since the merger announcement last month, a far cry from the gains at Barrick, Equinox and Argonaut. This may be partly because investors are still digesting the deal. But critics have voiced concern that it has no synergies.

“SSR is a bit of a head scratcher and the jury is still out,” Barnholden said.

Paul Benson, SSR’s outgoing chief executive officer, has defended the deal, touting a larger, more-liquid company will have greater capabilities, able to attract more investors. The merger with Alacer also got approval from a top holder, Ninety One U.K. Ltd.

Equinox Chairman Ross Beaty looks for value and real synergies in any potential combination, which he said was apparent in its tie-up with Leagold.

“For a zero-premium deal to work, there has to be a logic in the merger for shareholders to embrace” it, Beaty said in an interview. “The company got bigger, which attracted more investors,” and created real value for them, he said.

The recent slew of mergers of equals have mostly been applauded by shareholders and appear to be a win-win for everyone, said PI’s Barnholden.

“I think we will see more of them,” he said.