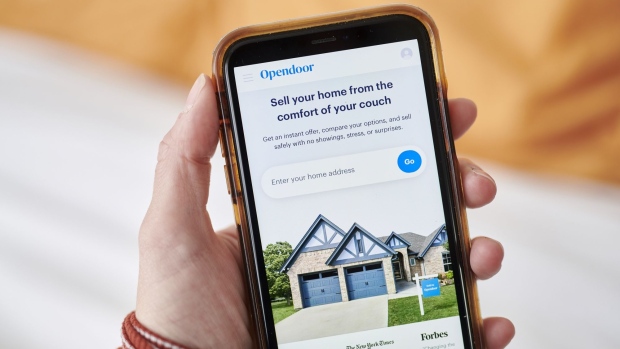 (Bloomberg) -- The struggles at Zillow Group Inc. are giving a boost to its less-famous rival Opendoor Technologies Inc.

Shares in the companies moved in opposite directions on Monday: Zillow plunged on the news that it is pumping the brakes on buying new homes for the rest of the year, while Opendoor’s stock jumped after saying it was “open for business.”

Beyond investors, general interest in Opendoor, run by Chief Executive Officer Eric Wu, is also spiking, with Google searches surging for the company.

Opendoor Faces an Expensive Path to Profitability in Real Estate

Wu started Opendoor in 2014 with a group that included venture capitalist Keith Rabois to simplify the notoriously complex process of buying a hone, especially for people who were trying to sell their old property.

The company’s model relied on number-crunching algorithms and financial capital to buy and sell homes. When it closed a purchase, it made light repairs and put the property back on the market, seeking to profit by charging the seller a fee.

The business looked risky to outsiders, but it was soon copied by Offerpad Solutions Inc., Redfin Corp. and eventually Zillow, which launched its iBuying business, Zillow Offers, in 2018.

Opendoor, which went public last year through a merger with one of Chamath Palihapitiya’s blank-check companies, has maintained a lead on its competition. It bought roughly 8,500 homes in the second quarter, more than twice as many as Zillow. It also lined up billions of dollars in debt facilities to fund future growth.

Still, Zillow’s name recognition gives it an inherent advantage. The online real estate giant’s apps and websites draw more than 2 billion page views a quarter, giving the company a source of free advertising for its iBuying service. Opendoor, by contrast, has had to spend on advertising to alert potential customers to its service.