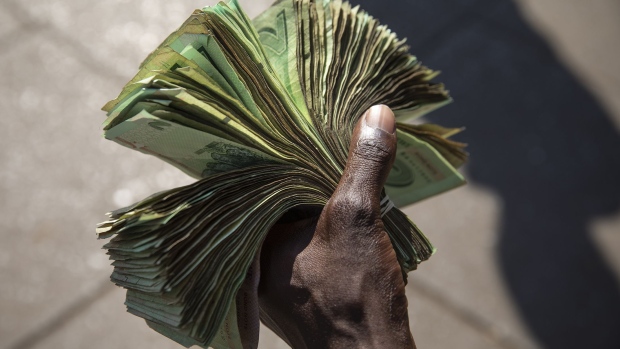 (Bloomberg) -- Zimbabwe lifted a 10-day ban on bank lending as critics warned that the government has shattered confidence in the already stagnant economy.

While the ban was announced by President Emmerson Mnangagwa in a bid to halt the runaway depreciation of the Zimbabwe dollar it quickly chilled economic activity, with agri-processing companies including sugar mills saying they couldn’t advance funds to farmers to grow their crops. That led to a gradual relaxation, with the government first saying it didn’t apply to commodities and then allowing citizens with access to foreign currency to import their own goods.

The measure, the lifting of which was announced by Reserve Bank of Zimbabwe Governor John Mangudya on Tuesday, has had little impact on the exchange rate. Instead, it has allowed the government to scapegoat the private sector for its collapse, which has pushed inflation to 96%. The Zimbabwe dollar is trading as low as 420 to the greenback on the black market, similar to its level before the measure was announced. The official rate is 173 to the dollar, down from 166. That compares with the parity it had when a precursor was pegged to the US unit in February 2019. A new interbank rate, which is currently at 285, has also been established.

“By stopping lending the government is, as always, deflecting attention and scapegoating,” said Shelton Sibanda, chief investment officer at Imara Asset Management in Harare, the capital. “The main issue has always been actual money creation by government and the Reserve Bank of Zimbabwe, which they can do without limit- hence the inflation.”

With little faith in the value of the Zimbabwean dollar holders almost immediately turn to the black market, chasing the local currency higher.

Still, authorities said private companies had been borrowing money to speculate in the currency market and that had resulted in the decision to halt lending temporarily.

“What we had seen was significant borrowings,” Persistence Gwanyanya, a member of the central bank’s monetary policy committee said in an interview. “The borrowings are largely directed to the auction system, parallel market and stock exchange, its gambling and speculation.”

Mangudya said some companies are under investigation by the authorities and won’t be able to borrow money. He didn’t identify them in a statement.

Fanuel Mutoko, the chief executive officer of the Bankers Association of Zimbabwe didn’t immediately respond to a call to his mobile phone seeking comment.

The Confederation of Zimbabwe Industries, the largest industry association, said the lifting of the suspension was welcome. “The pain it had caused over the past one week was unnecessary,” Kurai Matsheza, president of the association said. “We are glad that they’ve come to realize that and acted on it.”

Still, with elections next year and a collapsed economy, further erratic measures can be expected, said Batanai Matsika, head of research at Morgan & Co. in Harare.

“There are going to be a lot of fire fighting measures that will be announced as we are heading towards elections,” he said. “There will be a lot of trial and error as they try to come up with measures on the exchange rate.”