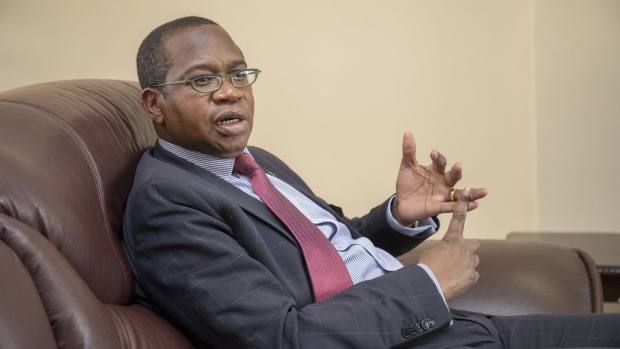 (Bloomberg) -- Zimbabwe is allowing ordinary citizens with access to U.S. dollars to import basic commodities for their own use to counter “substantial” price increases by retailers.

Finance Minister Mthuli Ncube said the government opened imports of basic commodities to citizens with immediate effect. This will be done “through the lowering of import tariffs and other accompanying measures,” Ncube said in an emailed statement late on Saturday. No further details were provided.

Annual inflation accelerated in April to 96% amid a weakening of the local currency in recent weeks. The Zimbabwe dollar trades at the interbank rate loosely referred to as the willing-buyer willing-seller exchange rate of Z$281 per U.S. dollar. It’s much weaker on the parallel market, where it changes hands at Z$400 per U.S. dollar.

The government will also pay farmers 30% of the producer price for corn and other grain deliveries in U.S. dollars and the balance in local currency to encourage early delivery of the staple corn by the farmers, Ncube said. “The U.S. dollar payment will be calculated at the prevailing willing-buyer willing-seller rate published by the Reserve Bank of Zimbabwe on the date of delivery,” he said.

The southern African nation produced a record 2.72 million tons of corn from its last planting season, but the current harvest is likely to slump to 1.56 million tons, Ministry of Agriculture projections show.