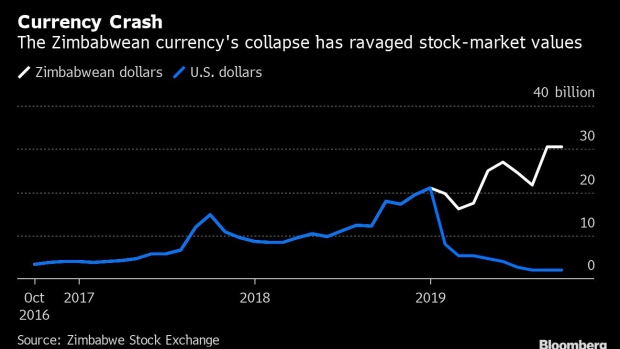 (Bloomberg) -- When it comes to adverse conditions for stock-market trading, Zimbabwe’s bourse belongs in a special category for extreme cases.

Consider the challenges confronting Zimbabwe Stock Exchange Chief Executive Officer Justin Bgoni: a local currency that has crashed more than 80% since a peg to the U.S. dollar was ended in February and annual inflation that the International Monetary Fund estimates at 300%.

While Harare’s Industrial Index is at a record high and market capitalization in local currency terms has surged by 169% from a year ago to Z$31 billion, in dollar terms they have crumbled to the lowest in a decade, at $1.9 billion. In the past, investors have used the stock market as a shelter to ride out economic turmoil in the southern African nation, but its haven status has been shaken by the return of the Zimbabwe dollar and hyperinflation.

“Our market capitalization in U.S. dollar terms -- that’s just been worse, we are almost half of what we are normally at,” Bgoni, in the job since March, said in an interview in his office in the capital, Harare. “If it was a normal country, where things are not indexed in U.S. dollars, things wouldn’t be so bad.”

When it comes to assessing individual stocks, hyperinflation skews the picture for traders, said Lloyd Mlotshwa, head of equities at IH Securities, a Harare-based brokerage. While companies are showing significant gains in revenue, actual volumes of products sold are down and overall performance is deteriorating.

“The massive devaluation of the currency has also caused a dislocation in stock market valuations,” said Mlotshwa. “Some firms are trading below the replacement values of their plants. At the same time, sentiment is so negative that this isn’t necessarily being interpreted as a buy signal.”

In February, the 1:1 parity peg between so-called bond notes and the U.S dollar was removed. In June, Finance Minister Mthuli Ncube abolished the use of the multicurrency system and reintroduced the Zimbabwe dollar as sole legal tender, almost a decade after it went out of circulation because of hyperinflation. The Zimbabwe dollar on Friday was trading at 15.85 per U.S dollar, compared with the February rate of 2.5 adopted at the end of parity.

Economic conditions in Zimbabwe, its struggling companies and inconsistent government policies all make local stocks less attractive to foreigners, Bgoni said. In terms of market development and options for investors, he estimated the bourse trailed African peers in Botswana, Kenya and Nigeria by about 10 years.

“We are really down on foreign investors and we almost have no new money coming in,” he said.

Foreigners accounted for 15% of trades in October, the lowest in three years, and down from the record 82% in February this year.

“We want foreign investors, especially when you have a devaluation of this sort, because they would be able to see bargains and bring up the prices,” Bgoni said. “But then, they can’t take their money out,” due to foreign-exchange controls and other Treasury regulations, he added.

--With assistance from Ana Monteiro.

To contact the reporter on this story: Ray Ndlovu in Johannesburg at rndlovu1@bloomberg.net