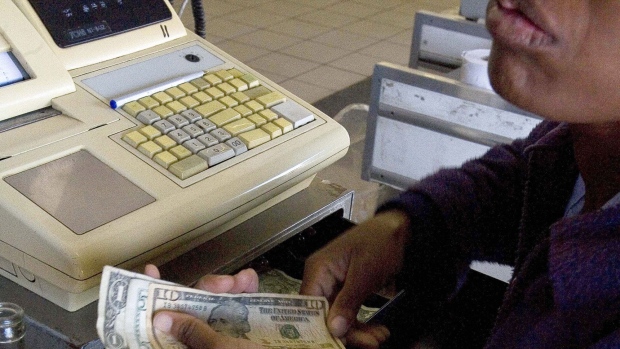 ZIMBABWE - APRIL 23: A check out cashier holds U.S. dollar notes from an open till at a supermarket in Harare, Zimbabwe, on Thursday, April 23, 2009. The South African rand is the "reference" currency being used in Zimbabwe, and is the most popular in circulation together with the U.S. dollar, the Economic Planning Minister Elton Mangoma told reporters in Pretoria. (Photo by Kate Holt/Bloomberg via Getty Images) Photographer: Bloomberg/Bloomberg , Photographer: Bloomberg/Bloomberg

Ncube said such a move could result in foreign currency deficits and deflation for the African nation.

“We cannot adopt the United States dollar alone as the official currency,” Ncube told lawmakers during a pre-budget consultation meeting, according to the Harare-based newspaper.

“You were there before and there were queues at banks, huge foreign currency deficits and you had deflation. That was because of the U.S dollar,” he said. “It is not a good idea, and it will be suicidal to do so.”

Local companies have experienced delays in accessing foreign currency at the weekly central bank foreign exchange auction, forcing several to source money on the parallel market. That’s led to a wider spread between the official and parallel market rates over the past two months.

The Zimbabwe dollar officially trades at 93.08 per U.S. dollar, but is readily available at 160 to the dollar on the streets of Harare.