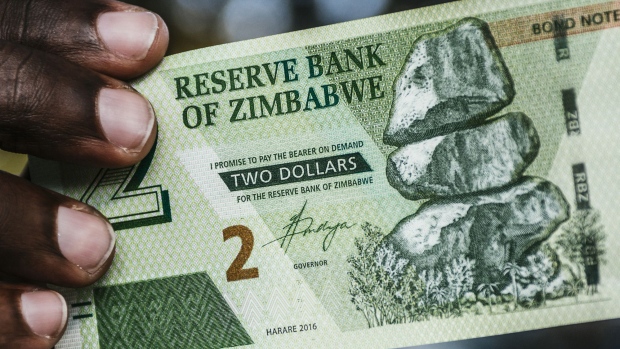 A man holds a Zimbabwean two dollar bond banknote for an arranged photograph in Harare, Zimbabwe, on Tuesday, July 31, 2018. Zimbabwe's main opposition party said it was well ahead in the first election of the post-Robert Mugabe era and it's ready to form the next government, as unofficial results began streaming in. , Bloomberg

(Bloomberg) -- Zimbabwe will put the first notes of its reintroduced currency into circulation in November, said Eddie Cross, a member of the central bank’s Monetary Policy Committee.

Zimbabwe has been chronically short of paper cash, forcing most transactions onto electronic platforms such as mobile-money system Ecocash.

“we have insufficient cash in the system to meet people’s needs for transactions,” Cross told the Zimbabwe Broadcasting Corp. The new notes “should do away with the queues at the banks and people then should have adequate money for daily use.”

The Zimbabwe dollar was reintroduced in June in electronic form after being abolished in 2009 following a bout of hyperinflation.

To contact the reporter on this story: Ray Ndlovu in Harare at rndlovu1@bloomberg.net

To contact the editors responsible for this story: Gordon Bell at gbell16@bloomberg.net, Antony Sguazzin