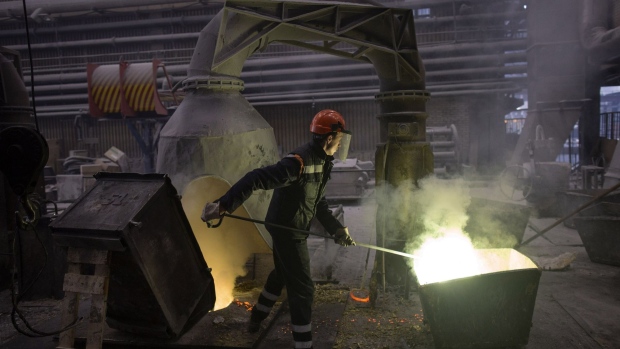 A worker uses a rod to stir a mixture of molten copper and zinc in the foundry at the Valjaonica Bakra Sevojno AD copper mill in Sevojno, Serbia, on Tuesday, Oct. 26, 2021. For months, the copper market has been caught in a tug of war between steadily shrinking supplies on one side, and an increasingly strained global economy on the other. Photographer: Oliver Bunic/Bloomberg , Bloomberg

(Bloomberg) -- Zinc and aluminum climbed after the London Metal Exchange said it will restrict new deliveries of the metals from Russia’s Ural Mining & Metallurgical Co. and one of its subsidiaries.

Starting immediately, metal from UMMC or its Chelyabinsk Zinc unit can only be delivered to LME warehouses if the owner can prove to the exchange that it won’t constitute a breach of recent sanctions on the firm’s co-founder, Iskandar Makhmudov. The move is by far the most significant restriction on Russian supplies by the world’s main metals market since the invasion of Ukraine.

That gave support to industrial metals, which have slumped this year amid concerns over demand from China’s Covid Zero-impacted construction sector and a slowing global economy. Zinc is down about 30% since April, while copper has fallen 29% from a March peak.

The metals industry has been grappling with how to handle supplies from Russia -- a major producer of aluminum, nickel and copper -- and the debate has intensified over the past month. Some European buyers have been trying to avoid Russian supplies, even as the energy crunch triggers curbs to the smelting capacity of firms like Glencore Plc.

United Co. Rusal International PJSC said banning its aluminum would damage the standing of the LME, ratcheting up its pushback after US rival Alcoa Corp. said the exchange should stop accepting Russian metal.

Lead climbed 1.3% following the shutdown of Nyrstar’s furnace at Port Pirie in South Australia. Stockpiles of the metal immediately available to withdraw from LME warehouses plunged to a record low, and near-term spreads have jumped recently in a sign of tighter supplies.