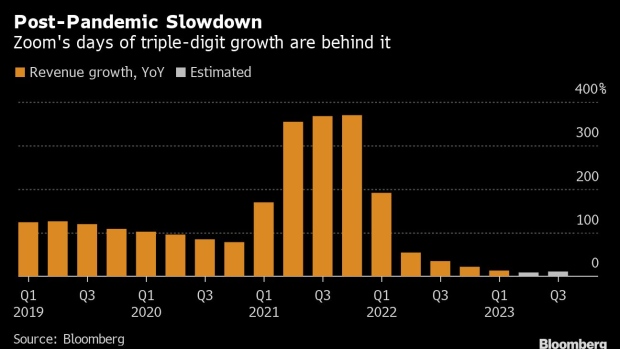 (Bloomberg) -- Zoom Video Communications Inc. is navigating life after the pandemic by acting like the past two years never happened.

As the world shut down in 2020, its corporate videoconferencing app became a household name, delivering quarter after quarter of triple-digit growth in part by attracting millions of regular people and small businesses. Zoom seemed destined to become a consumer tech titan.

But while executives waxed poetic about facilitating graduation parties and family dinners, they never intended to become a destination for everyday people and weren’t able to sustain the momentum. Besides, corporate customers have deeper pockets and don’t drive bad press by Zoom-bombing each other or fumbling privacy settings.

“When the pandemic crisis hit us, we were not ready,” founder and Chief Executive Officer Eric Yuan said in a March interview, comparing the experience to leaping from a high school basketball team to the NBA. After two years of trying to monetize demand from consumers, many of whom were sticking with free 40-minute calls, Yuan is ready to return Zoom to its roots: a provider of business software. Investors aren’t convinced he can make it work.

Quarterly revenue surged 54% to $1 billion last July, but growth shriveled to 12% in the period that ended in April. And Microsoft Corp., the world’s biggest software maker, is Zoom’s chief competitor. The stock price, which jumped sixfold to a high of $568.34 in October 2020, is now hovering near pre-pandemic levels.

The question is whether focusing on the corporate market can revive growth, particularly as a rough economic environment could spur cost-cutting, said Matthew Niknam, an analyst at Deutsche Bank. “The bear case is that anybody who needs Zoom has it already,” he said.

That’s certainly true for everyday users and small businesses, which make up about half of Zoom’s sales — a level that’s now expected to remain stagnant. “You’re not going to sell a lot more product to the consumers,” said Meta Marshall, an analyst at Morgan Stanley.

But Yuan is confident in his strategy. Ever the basketball fan, he said true success takes time, citing the careers of National Basketball Association stars LeBron James and the late Kobe Bryant as players who didn’t win their first championships until years after they started in the league.

Part of Zoom’s plan is selling more videoconference licenses. But more important is expanding its line of corporate collaboration tools to include phones, persistent chat a la Salesforce Inc.’s Slack, customer contact centers, digital whiteboards and even physical conference room setups. Earlier this month, the company unveiled a new service bundle -- Zoom One -- to highlight its expanded tools and strategy.

“We are not just the meeting company that everyone knows us for,” Chief Financial Officer Kelly Steckelberg said in an interview, adding that enterprise customers are fueling almost all projected growth. Zoom’s reputation for easy-to-use software has driven success of its other services, Steckelberg said, and its top non-video product, Zoom Phone, has sold 3 million user licenses.

Indeed, public recognition of Zoom after the pandemic is “truly astonishing” and should help drive future business, said Vanitha Swaminathan, director of the University of Pittsburgh’s Katz Center for Branding. “The fact that people say ‘I will Zoom with you’ is evidence the brand has become deeply embedded,” she said.

Artificial intelligence capacity will be a key differentiator for Zoom’s new services, Yuan said. Earlier this year, the company unveiled a tool for salespeople that mines video calls for sentiment data to help close deals, although Microsoft has announced a similar feature. Zoom has also spoken about delving further into emotional analysis, a controversial science that has drawn ire from bias-concerned activists.

Customer contact-center services are another area of enthusiastic investment, despite competition from companies such as ServiceNow Inc., Twilio Inc., and Genesys Cloud Services Inc. After Zoom’s all-stock $14.7 billion deal for Five9 Inc. fell through last year due to slipping share prices, it purchased a smaller startup, Solvvy, to bolster conversational AI capabilities. Though the products are outside of Zoom’s main collaboration portfolio, many of the company’s customers still use on-premise contact centers, which makes it a good expansion target, Yuan said.

Zoom isn’t the only pandemic darling going through an identity crisis. Companies such as Shopify Inc., Peloton Interactive Inc. and Netflix Inc. that were on top of the locked-down world have been battered by tumbling shares and had to adjust their strategy, prices and expectations.

One issue confronting these stay-at-home stocks is what happens as offices fill up. Zoom isn’t worried — Steckelberg said that even financial firms that have returned to the office five days a week aren’t canceling licenses and many new services are catered for the office.

As for the dour economic sentiment, Steckelberg won’t say there’s been no impact, but enterprise demand remains strong, and Zoom doesn’t plan to eliminate jobs.

But if a recession hits, corporations may cut redundant software products. The average enterprise has four paid videoconferencing services, according to research firm IDC. Steckelberg said that Microsoft Teams — Zoom’s biggest competitor — is often seen as free because it’s bundled with other services, but adds that Zoom is priced competitively and many customers are willing to pay more.

An October survey of corporate chief information officers from Morgan Stanley found that Teams has slightly surpassed Zoom as the primary videoconferencing system used by companies. IDC estimates that Zoom’s market share is about equal with Teams while Cisco System Inc.’s Webex, the other top competitor, has slipped.

Customers deserting Webex is one of the main sources of new corporate business, said Tyler Radke, an analyst at Citigroup Inc. Earlier in the pandemic, most of these businesses were signing up for Zoom. Today, it seems like they’re almost entirely opting for Microsoft Teams, he said.

For its part, Cisco said it leads the enterprise segment in revenue, citing a report by Synergy Research Group. Jeetu Patel, Cisco’s executive vice president for collaboration and security, said that Zoom hasn’t sustained its pandemic-era advantage, and that Webex sees Teams as the real competition. “It’s like a basketball game -- things can change in a matter of seconds.”

Yuan said competition is a motivator, citing Zoom’s moves to hire more than 4,000 new employees, improve internal processes and lay out a clear formula for growth. He added that after two years of reacting to nonstop demands, there is finally time to focus on the company’s long-term plan.

How does Yuan describe the mindset for the future? “Work harder and evolve to make sure you’re a very good NBA-level player — that’s exactly what we’re doing.”