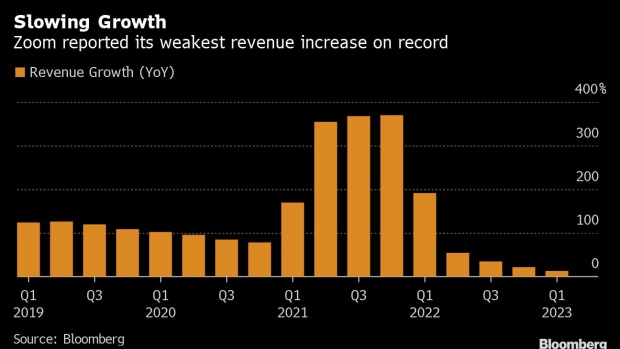 (Bloomberg) -- Zoom Video Communications Inc. projected sales and profit for the current quarter that topped Wall Street’s estimates, a sign that the software vendor is finding ways to sustain growth beyond the pandemic boom. Shares jumped 15% in extended trading.

Revenue will be as much as $1.12 billion in the period ending in July, the San Jose, California-based company said Monday in a statement. Analysts, on average, estimated $1.11 billion, or growth of about 9% from a year earlier, according to data compiled by Bloomberg. Profit, excluding some items, will be as much as 92 cents a share compared with analysts’ average estimate of 84 cents. For the full year, Zoom raised its earnings forecast to as much as $3.77 a share from its February projection of $3.51.

The company’s new products are “enhancing the customer experience and promoting hybrid work,” Chief Executive Officer Eric Yuan said in the statement. “We believe these innovative solutions will further expand our market opportunity for future growth and expansion with customers.”

Zoom hasn’t maintained the breakneck triple-digit growth it experienced during the pandemic as offices reopen and competition increases from Microsoft Corp.’s rival video communications platform. Fiscal first-quarter sales increased 12% to $1.07 billion, Zoom’s slowest year-over-year growth on record. While the company’s shares have plummeted 51% this year as part of a broad decline among software makers, some analysts think the selloff has gone too far.

Benchmark Co.’s Matthew Harrigan said in a note before the results that investors have overlooked Zoom’s potential as a key tool for hybrid workplaces as major industries embrace remote work. The company is focusing on its enterprise offerings by expanding products for customer service contact centers and analytics. Zoom recently announced the acquisition of Solvvy, a conversational AI startup, and unveiled Zoom IQ, a call analytics tool for sales departments.

Emphasizing this shift away from the consumer business, Zoom has started reporting new metrics for enterprise customers. In the period ended April 30, the company said it had 198,900 enterprise customers, an increase of 24% from a year earlier, with a net dollar expansion rate of 123%.

“I think the market wants to see signs that Zoom isn’t just a Covid-stock,” said Tejas Dessai, a research analyst at Global X, which counts Zoom as a top holding of its cloud-focused exchange traded fund. “We would like to see increased consumption from larger enterprises, especially those with more than $100K in annual spending on the platform,” Dessai said in an interview before the results were released.