Many internet companies posted record performance during the pandemic as consumers turned to apps and other cloud software to work, study, socialize and shop from home. But as vaccines roll out and restrictions relax, some of this unprecedented digital demand is fading.

Data from research firm Apptopia reveal how the superstar apps of the COVID-19 era are faring now in the U.S. Plus, stats from New Zealand, a country that reopened earlier, show what the future might hold for these services.

Here’s the main takeaway: Many well-known apps are losing ground, or usage has stabilized. Some behaviors are sticking, though, suggesting the pandemic will provide a more-permanent boost for a few internet companies.

Zoom Video Communications Inc.’s app has been so ubiquitous during the pandemic that it’s now a verb. Lately, though, workers complain of “Zoom fatigue,” and data from New Zealand are ominous. Usage has dropped in that country as employees and students return to offices and schools. Even in the U.S., where most offices remain virtual, Zoom use peaked in September. The company said recently it’s well positioned for strong growth.

Microsoft Corp.’s Teams communication software was another work-from-home hit last year. That service has seen mobile app usage decline, too, especially in New Zealand. (This data excludes web users and some services are often accessed this way from company-issued laptops). 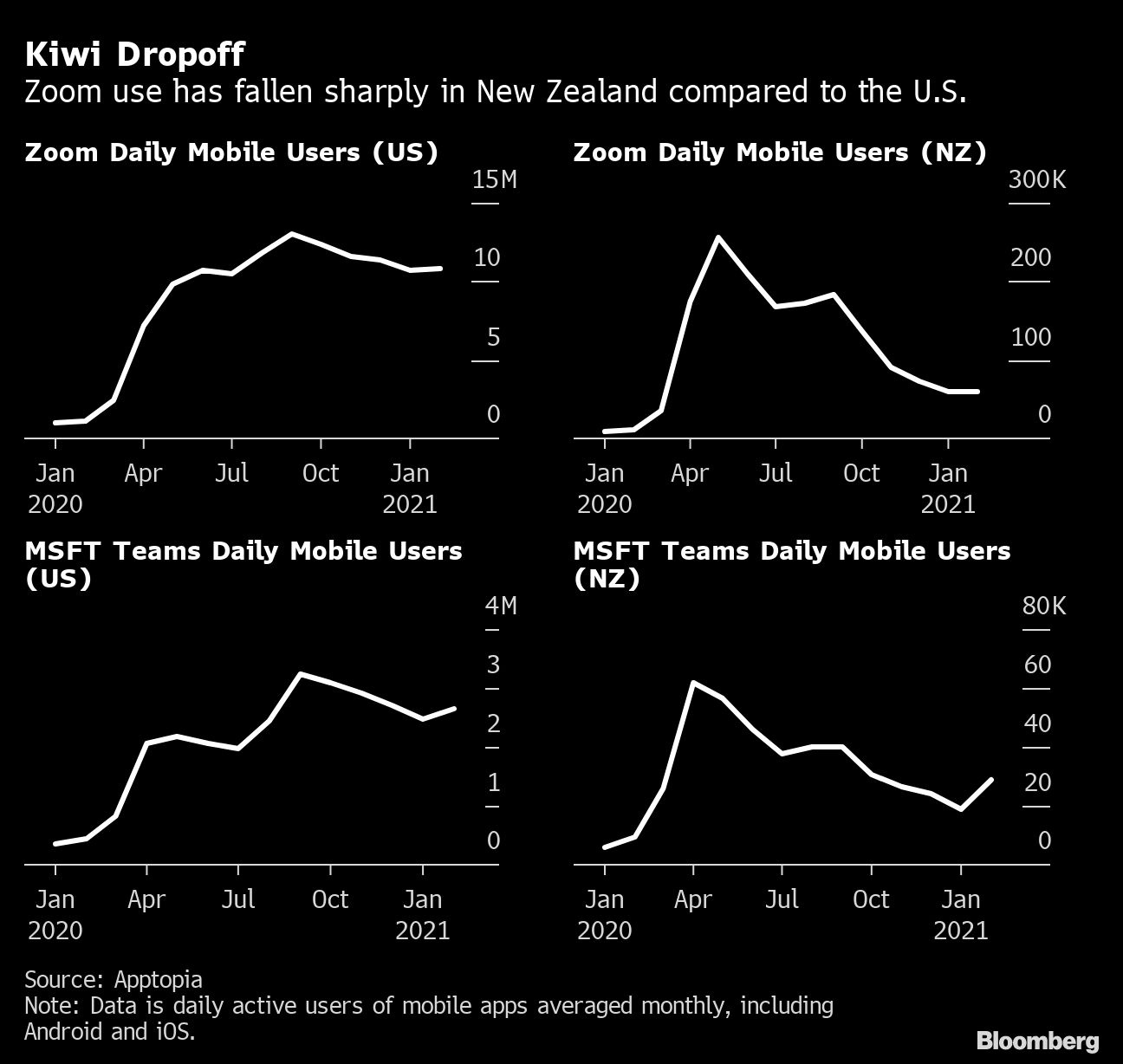 Other staples of the virtual workplace are here to stay, according to Apptopia data. DocuSign Inc.’s app, which lets you sign contracts and other documents digitally, has seen consistently high usage lately. The app has become a popular way to close real-estate transactions, so it is likely getting an extra boost from the housing boom. 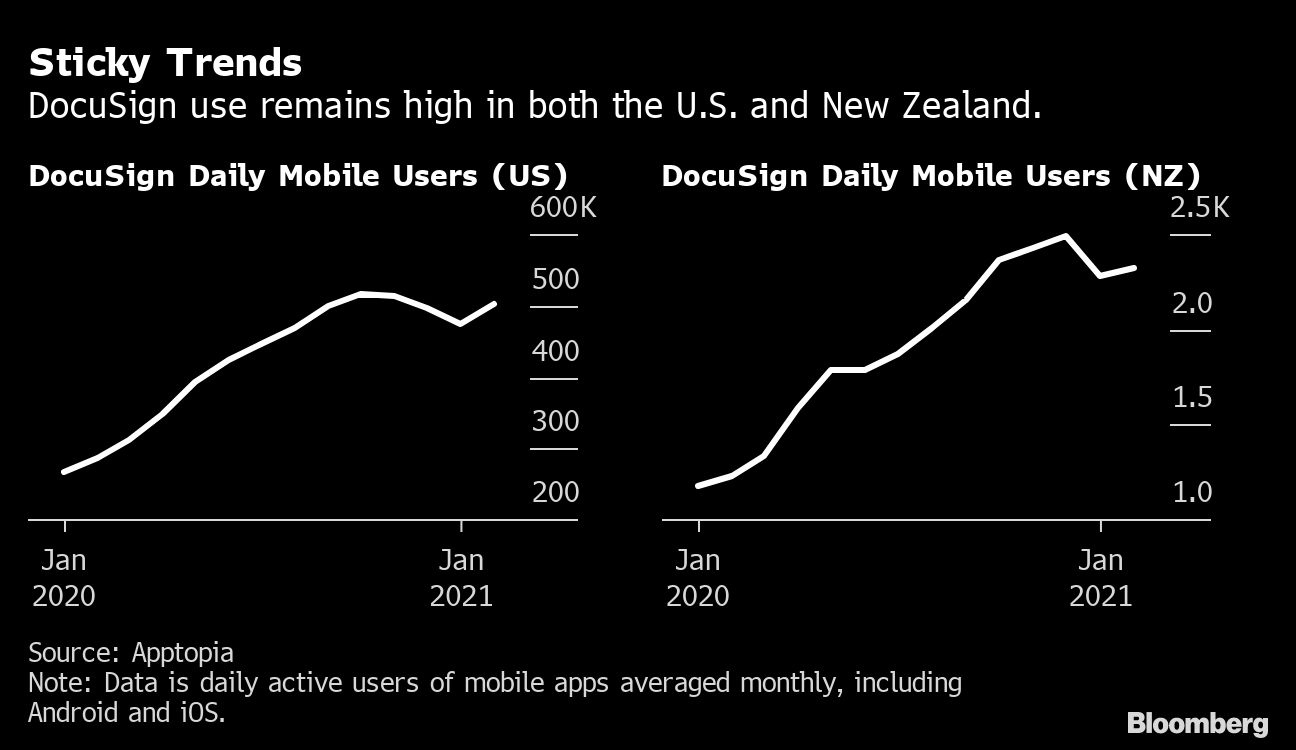 A central question during reopening is whether the appetite for ultra-convenience will continue. Food delivery apps, such as those from DoorDash Inc. and Instacart Inc., have experienced continuously high usage in the U.S., even as COVID-19 cases declined in 2021. Amazon.com Inc.’s app is still growing strong, too.

The data on Wayfair Inc., an online retailer of home goods that competes with Amazon, are less bullish. Usage of the company’s mobile app peaked in June and July as people relocated and set up home offices. There may be only so many office chairs people can buy — or limited cash left from stimulus checks. And as consumers venture outside more, they may pay less attention to home upgrades and spend money on other things. 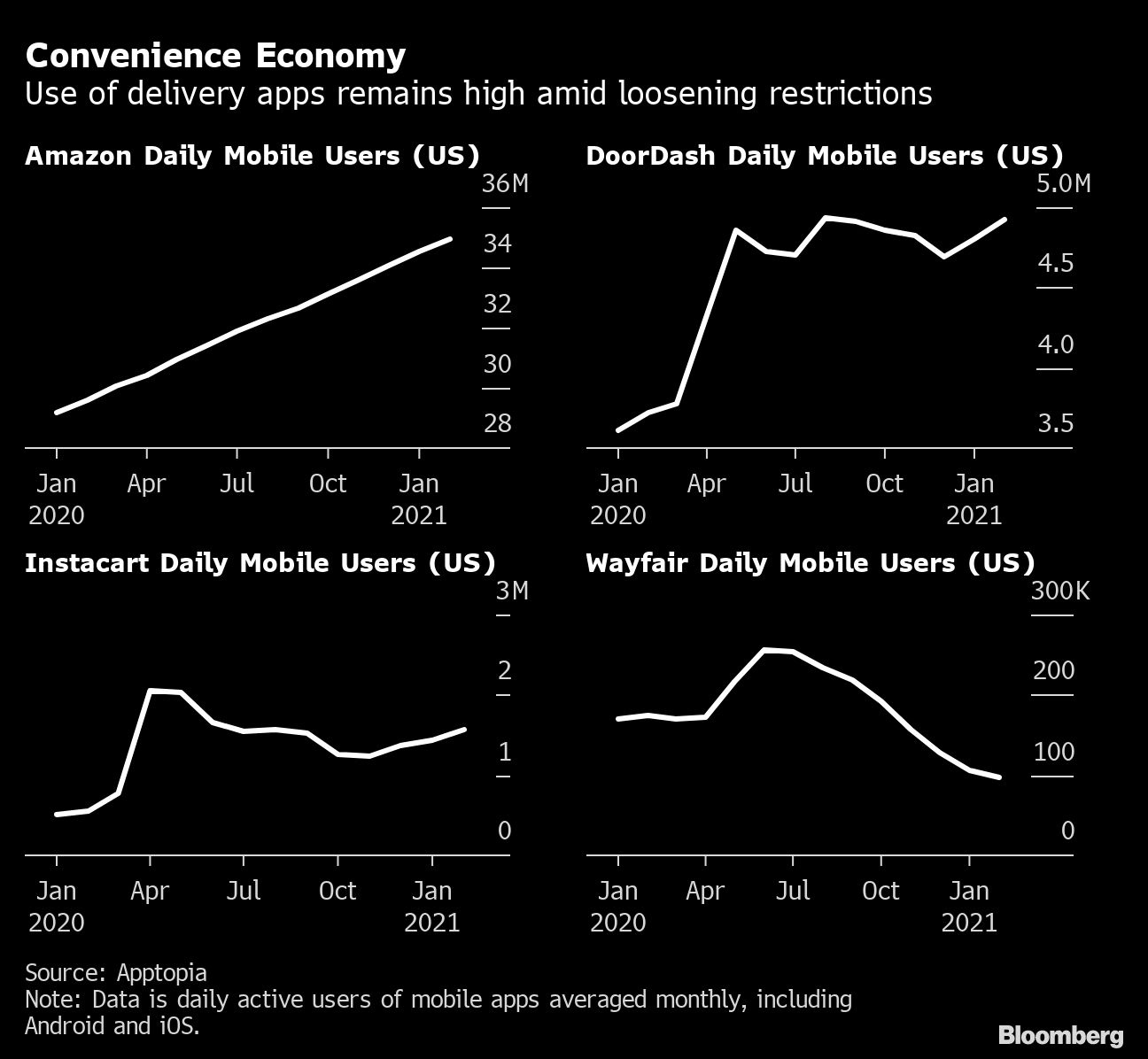 Social media apps have seen a steady increase in usage over the course of the pandemic as more people connect with each other digitally, rather than in person. Facebook Inc.’s main mobile apps, WhatsApp, Instagram and Facebook, collectively grew their U.S. daily active user base by almost 40 million between January 2020 and February 2021. 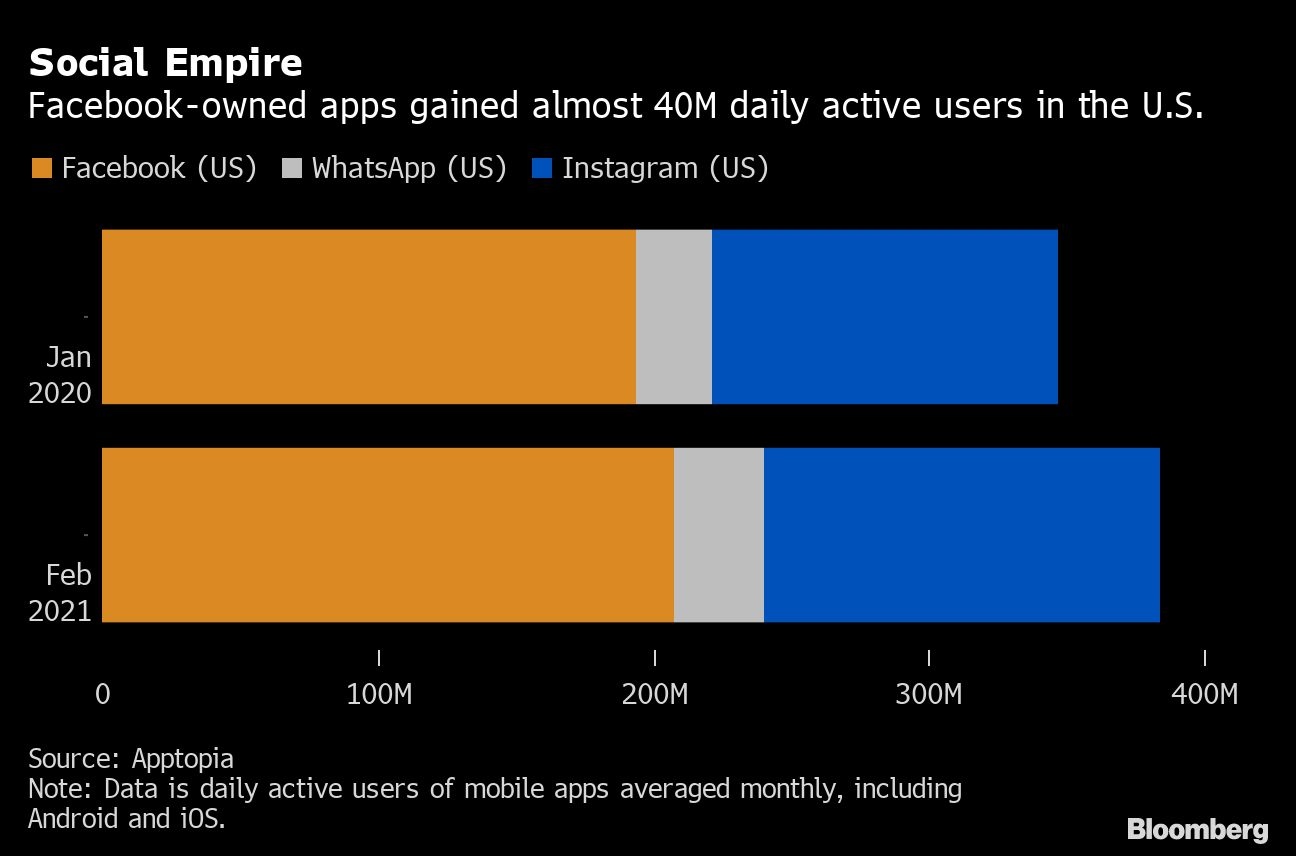 Other social-media apps have seen similar gains in the U.S. Google’s YouTube remains above pre-pandemic levels. Pinterest Inc. is consistently growing as more consumers turn to the app for inspiration and tutorials. Snap Inc.’s Snapchat app, which is popular with teenagers, saw user growth surge as schools shut. 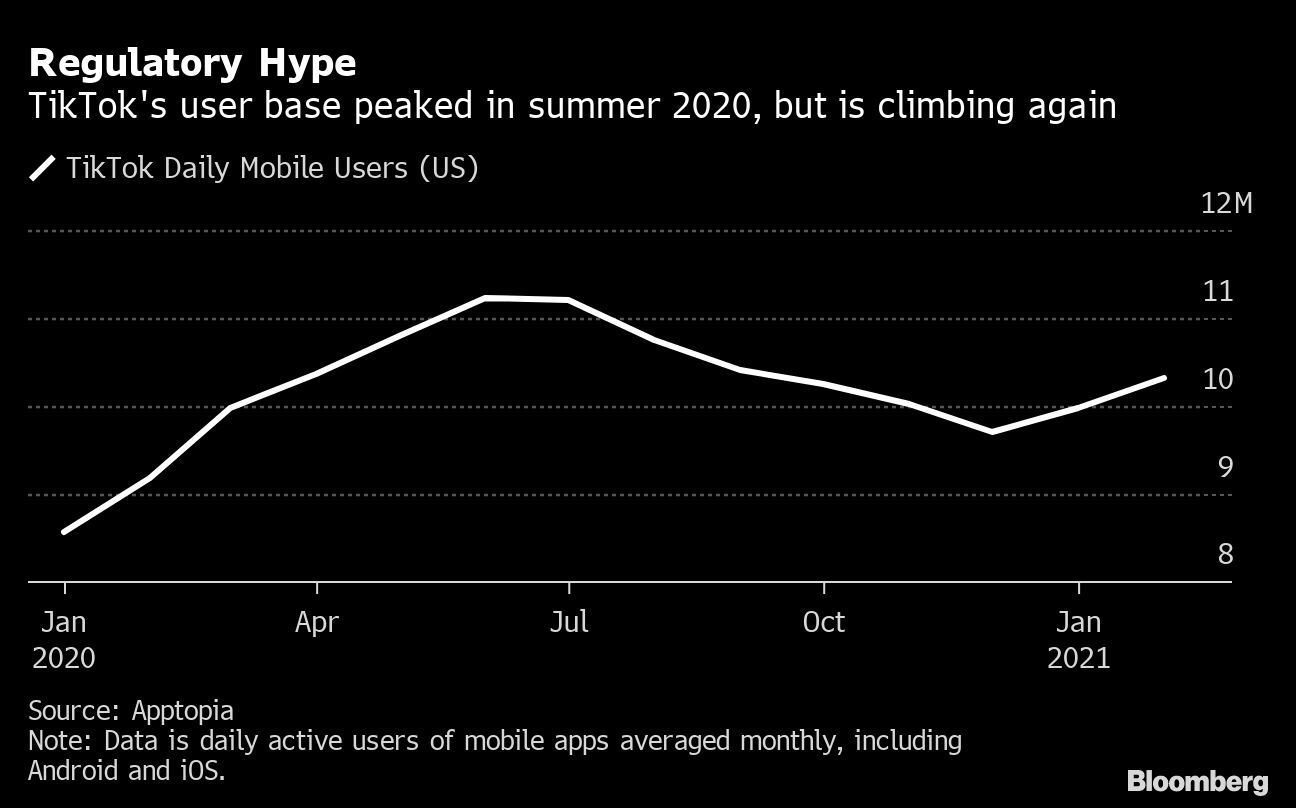 Short video platform TikTok saw usage soar in the spring, likely for similar reasons as Snapchat: kids were not in school so had more time to spend online. TikTok also gained national attention in early July when Donald Trump threatened to ban the app, spurring a rush of downloads before it potentially disappeared. That didn’t happen, but the app is being used less now, according to Apptopia data. 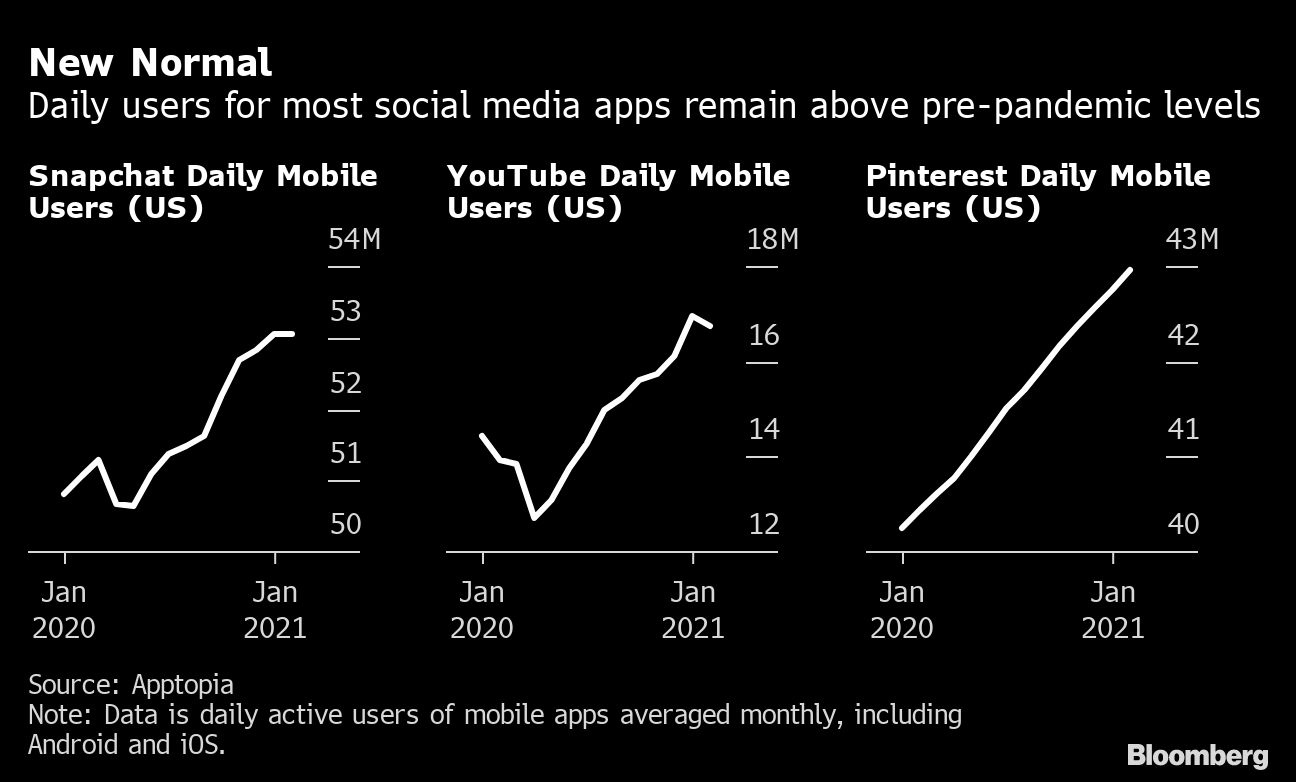 Travel restrictions are still common across the U.S., but travel apps are being used more than ever. Vacation rentals have been the star of the pandemic travel sector. Airbnb Inc., a home-sharing pioneer, has fared better than rivals as travelers take advantage of work-from-home opportunities, road-tripping to nearby mountain villages or beach towns, often booking longer stays than usual. 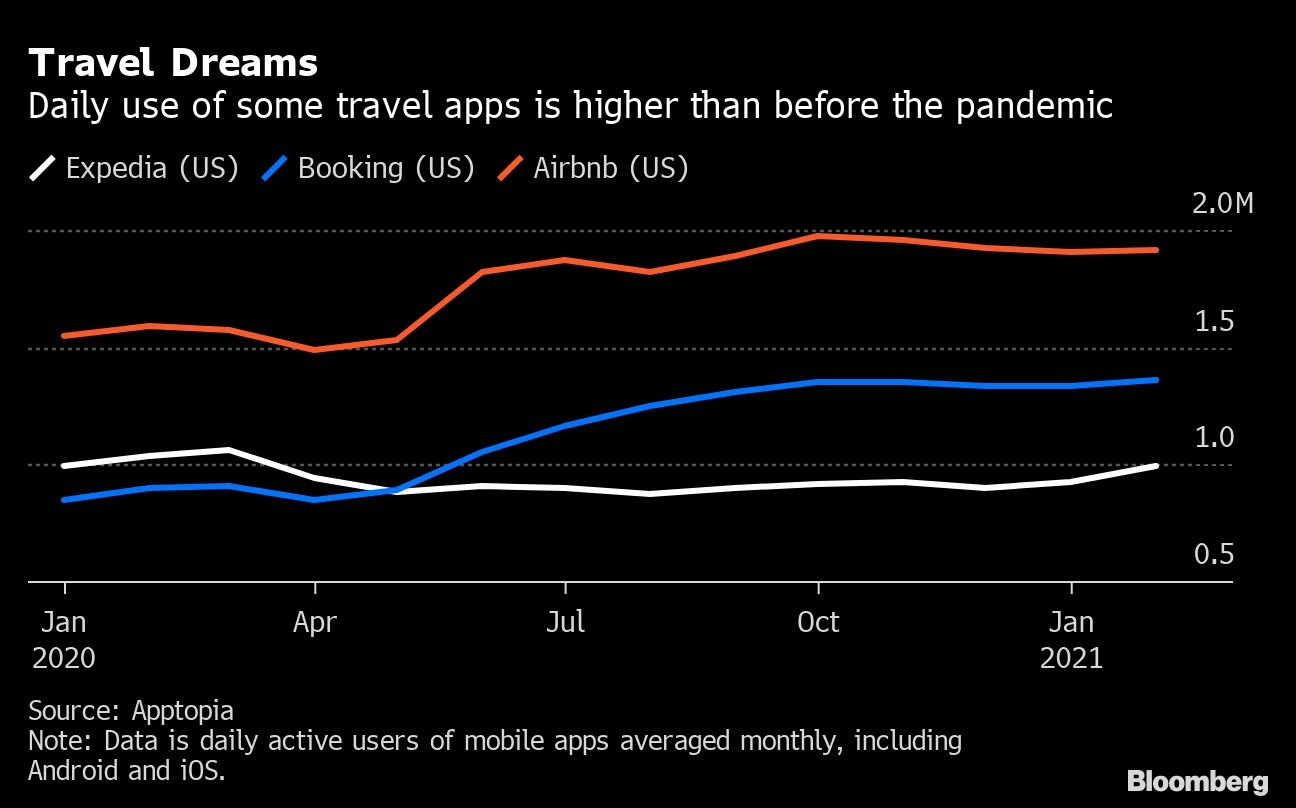 While many are fantasizing about travel, Americans are still staying home more than they used to, according to Google Maps app data. A rebound is likely, though. In New Zealand, usage of Google Maps just eclipsed pre-pandemic levels. 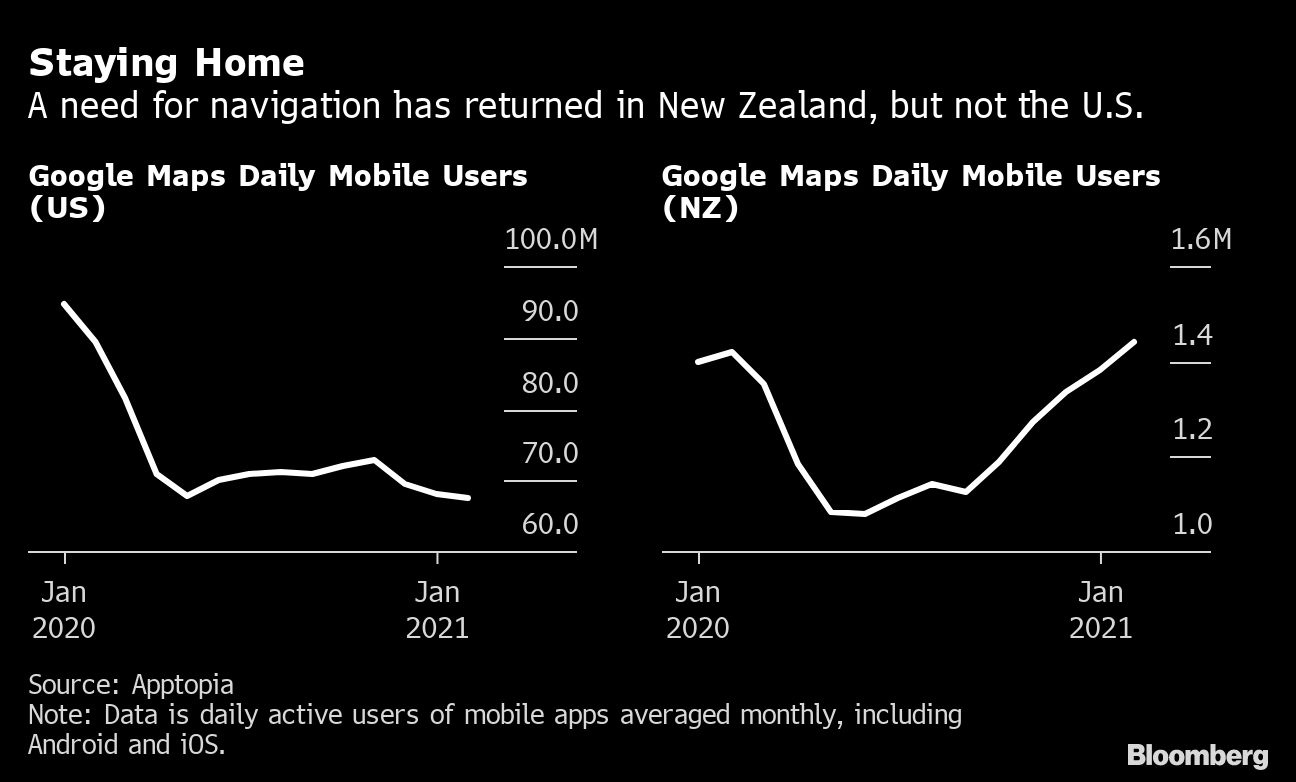