Zoom Video Communications Inc., whose online conferencing services took off during the COVID-19 pandemic, agreed to acquire Five9 Inc. for US$14.7 billion, using its surging stock to expand into an adjacent market that could bolster revenue as lockdowns end.

The value of the all-stock offer is US$200.18 a share based on the closing price for Zoom’s common stock on Friday, compared with Five9’s US$177.60 price on Friday, the companies said a statement Sunday. The target firm will become an operating unit of Zoom after the deal, which is subject to shareholder approval and slated to close in the first half of 2022.

Zoom has been looking for ways to keep growing as workers begin to return to the office and students go back to school, and the deal for Five9 will help it expand offerings to its more lucrative business and enterprise clients. Five9, based in San Ramon, California, makes cloud-based software that uses artificial intelligence to help companies answer questions from customers and interact with them regardless of language, location or device.

The traditional call center, where a customer service representative responded by phone, has shifted to the internet and is now often powered or augmented by chat bots. The market for these cloud-based customer call centers is estimated at US$24 billion, according to the companies. Together, Zoom and Five9 aim to better compete with the likes of Cisco Systems Inc., RingCentral Inc. and Amazon.com Inc..

Zoom Chief Executive Officer Eric Yuan called Five9 a “natural fit,” and said Five9 is complementary to Zoom Phone, the company’s business that replaces traditional company telephone services with modern, cloud-based offerings. But some analysts thought it was an expensive attempt to grab growth that Zoom couldn’t achieve on its own. Zoom shares fell 4.3 per cent at 9:54 a.m. in New York Monday, along with a broader market selloff.

“This is a high-priced deal which appears to attempt to build out the Zoom Phone offering,” said Neil Campling, an analyst at Mirabaud Securities. “Paying such a high price for a non-differentiated offering smacks of attempts to move into adjacent markets as Zoom fatigue sets in.”

Five9’s customers include big names like Under Armour, Citrix, Athena Health and Lululemon, according to its website. Rowan Trollope, CEO of Five9, will become a president at Zoom while continuing to run Five9 as an operating unit. Goldman Sachs advised Zoom and Qatalyst Partners advised Five9. 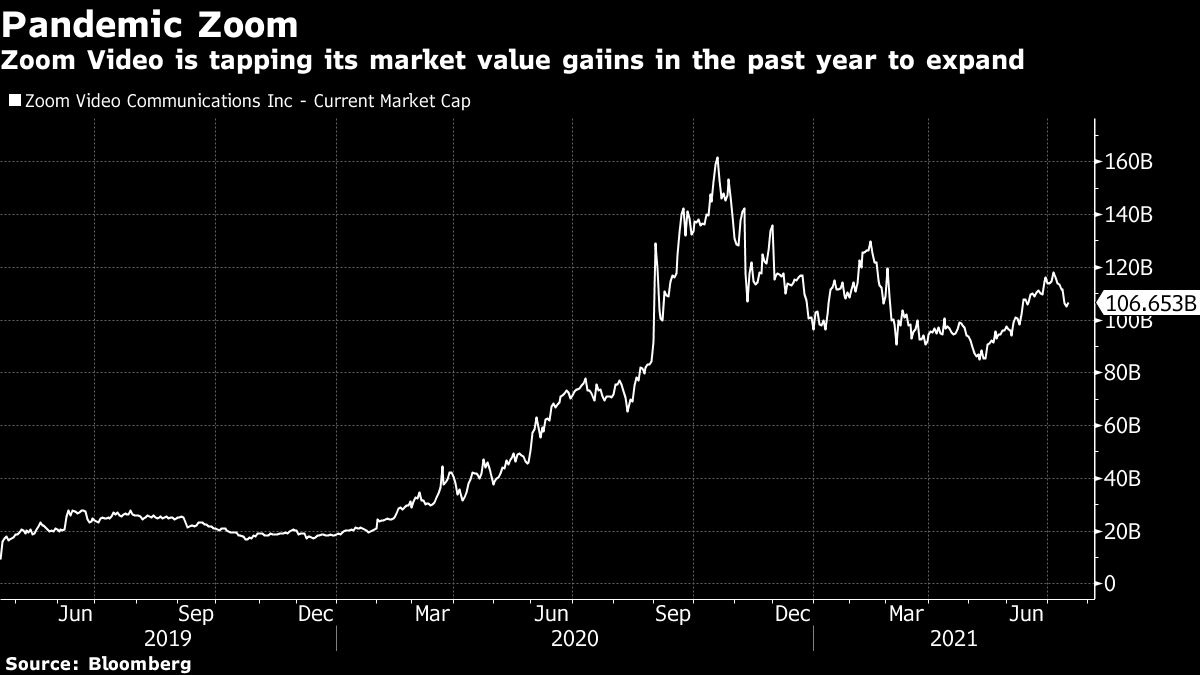 Joining forces builds on Zoom and Five9’s existing co-selling relationship and the decision was driven by “tremendous” customer interest to have one integrated solution, Trollope said on a call with analysts on Monday. “This is not an exit, this is just the beginning. We can absolutely come together to revolutionize this space.”

Trollope added that for Five9, the deal will allow the company to extend its reach globally by leveraging Zoom’s distribution network. “We had barely just scratched the surface. This is a good accelerator for international growth.”

Zoom rose to prominence after the pandemic hit in early 2020, becoming ubiquitous as people forced home by lockdowns used the service to connect remotely to work, school, friends and family. But investors have raised concerns this year about whether that growth will continue as vaccinations increase and shutdowns end.

As pandemic lockdowns have waned, the future of remote work has become a pressing question, and Zoom’s competitors have launched hybrid work features in a race to accommodate companies’ needs. Microsoft Corp. unveiled design changes to its Teams platform in order to improve remote workers’ interactions in meetings. Alphabet Inc.’s Google has revealed updates to its Workspace productivity suite, including new tools for its Meet videoconferencing system.

“With more workflows going digital, organizations are also no longer looking at contact center interactions with customers in a vacuum,” said Carolina Milanesi, president and principal analyst at Creative Strategies. “Being able to leverage the data across, say, sales or when escalating an issue can be more seamless when done on one platform.”

She pointed out that Cisco has tied its contact center product with its Webex teleconferencing software, making it more of a one-stop shop. The Zoom deal give the company similar strategies for integrating online chat and conferencing products, she said, adding that Five9 also provides Zoom access to artificial intelligence tools for analyzing data from a contact center.

The Five9 deal helps Zoom “grow their platform and participate in another market at the cusp of transitioning to the cloud as digital transformation efforts take hold,” Morgan Stanley analysts wrote.

The unified communications and collaboration (UC&C) market share of total IT spending may remain stable at around 5 per cent as companies shift to cloud-native platforms, and should stay so postpandemic. That’s because organizations are rethinking their plans for digital technologies to include video, voice and team collaboration tools as flexible or hybrid-work models gain traction. UCaaS should stay a key growth driver for the US$47 billion UC&C industry, with companies increasingly bundling video and collaboration solutions on the cloud to accommodate the secular change in work culture.

Zoom is taking advantage of a stunning stock rally to bankroll the acquisition of Five9. Its stock soared about five-fold during 2020 and has risen another 7.3 per cent in the year to date, pushing its market value past US$100 billion. 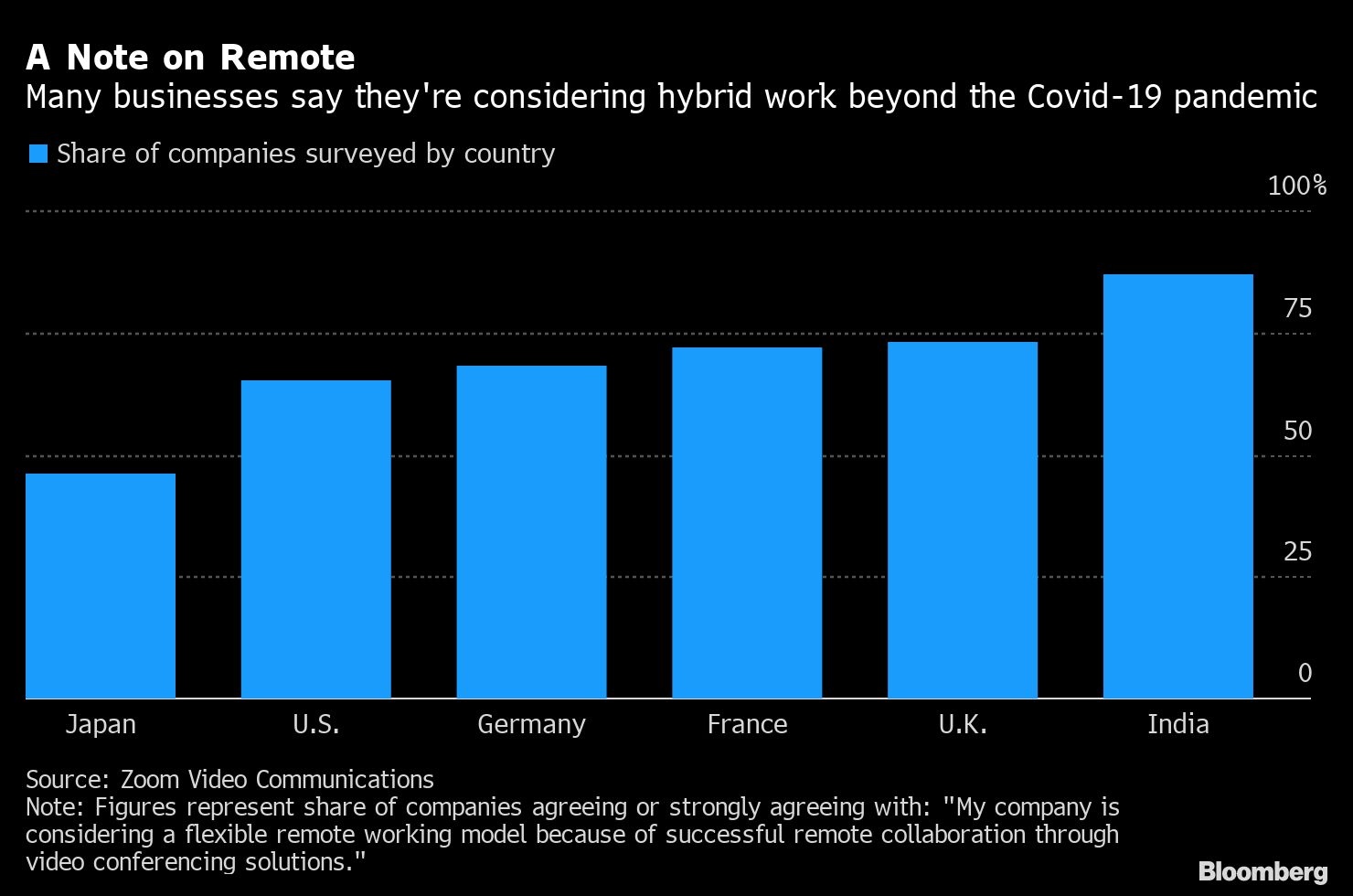 Five9 competes in a market for cloud services that help companies handle customers. Amazon entered the market with Amazon Connect in 2017. Other vendors include Talkdesk Inc. and Vonage Holdings Corp.

The acquisition is Zoom’s fourth since the start of the pandemic, according to data compiled by Bloomberg. In June, Zoom announced that it had signed a deal to acquire German startup Karlsruhe Information Technology Solutions-kites GmbH, a translation software maker.

In March, Zoom was part of a group that acquired a minority stake in software firm Assembled Inc., the data showed. And in May 2020, it bought Keybase Financial Group Inc., which makes a secure messaging and file-sharing service, for undisclosed terms to bolster its encryption technology.

Zoom was founded in 2011 by Yuan, the Chinese-born son of mining engineers who grew up in Shandong province. Yuan idolized Microsoft founder Bill Gates and longed to work in Silicon Valley. After two years of failed efforts to secure a U.S. visa, he succeeded on his ninth try. Early on, he worked at then-startup Webex, the online conferencing tool that was later acquired by Cisco. He rose through the ranks to become a vice president of engineering, managing 800 workers, and agitated unsuccessfully for Cisco to develop a product that worked on mobile phones, as well as PCs.

As it surged in popularity during the pandemic, Zoom suffered growing pains, often coming under criticism for privacy lapses. It was chided for a policy that let it share the content of video chats with ad-tracking companies, and it made claims about privacy protection using end-to-end encryption that weren’t true. In one of the most startling revelations, made by University of Toronto researchers, Zoom sometimes routed meetings through servers in China even when participants were outside the country. That raised the prospect of snooping by Chinese authorities. The company went on to address several issues, with Yuan apologizing publicly.