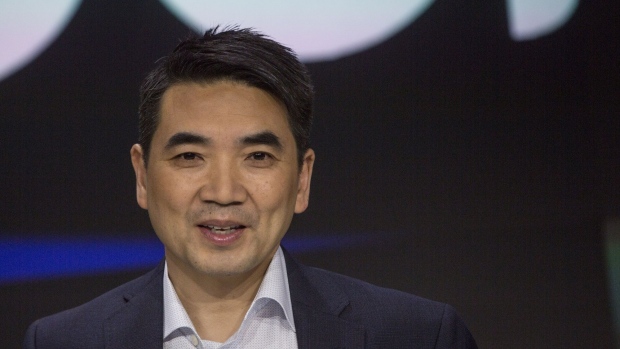 Eric Yuan, founder and chief executive officer of Zoom Video Communications Inc., stands before the opening bell during the company's initial public offering (IPO) at the Nasdaq MarketSite in New York, U.S., on Thursday, April 18, 2019. Zoom reported net income of $7.6 million on revenue of $331 million for the year ended January, and is now worth nine times the $1 billion valuation it secured after a funding round two years ago. , Bloomberg

“Chat is a very important functionality for our overall usage,” Yuan said Wednesday during an online meeting with analysts. “The core priority is how to further improve the integration between chat, video and voice.”

Customers are satisfied with Zoom’s current chat sidebar during videoconferences and the company isn’t interested in chasing Slack and Microsoft Teams by delving further into the market, he added.

“We really integrate very well with Slack, with Teams,” Yuan said. “We give customers flexibility. We are picking a very open-minded approach. We are not saying we want to build our own chat to compete against others. I don’t think we need that, because video and voice, that’s our focus.”

Earlier, Zoom unveiled a raft of new products and initiatives during its Zoomtopia user conference in a bid to maintain its explosive revenue growth of the past six months during the coronavirus pandemic. The company pitched itself as an integral platform in the digital economy, at the center of corporate workflows and a hub for users who’d like to throw free, paid or charity events while people socially distance.

Zoom also updated investors on revised financial goals, saying it is targeting a long-term adjusted operating margin of 25 per cent of revenue, and a gross margin of 80 per cent of revenue. Under this framework, the company would spend 10 per cent to 12 per centof revenue on research and development and 30% to 35% on sales and marketing. The company didn’t specify a time frame for those goals.

Zoom’s meteoric rise has put it in a better competitive standing against Microsoft than many of its cloud-based application peers. Yuan said he hopes to partner more in the future with the world’s largest software maker even though Microsoft has a rival videoconferencing service called Teams.

Yuan said he doesn’t wake up thinking about Microsoft as a “top competitor,” but instead sees his company as a good partner for the software giant since Microsoft’s messaging and file-sharing tools, for example, work well with Zoom’s meeting, phone and webinar services.