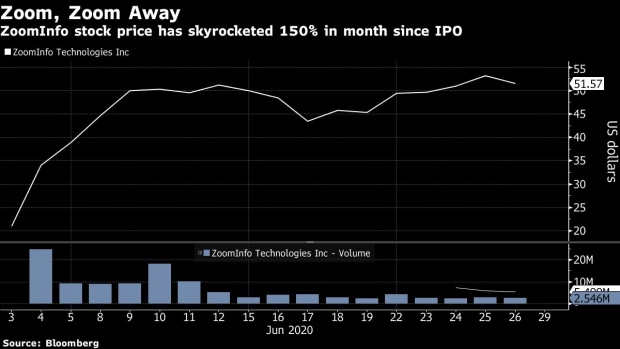 (Bloomberg) -- ZoomInfo Technologies Inc., a business intelligence and marketing solutions company that recently had the largest ever initial public offering by an advertising company, was showered by the start of Wall Street research coverage Monday, some of which was bullish in the extreme, with one analyst saying it offered the “Holy Grail of Sales,” while other initiations were far more modest in their expectations.

The Vancouver, Washington-based firm, which trades on the Nasdaq under ZI, became public less than three weeks ago, raising $935 million at $21 per share. ZoomInfo has since skyrocketed, closing at $51.57 Friday — a roughly 150% increase in less than a month. The company opened 90% above its IPO price on June 4, the most of any stock since 2006 among deals that raised at least $900 million, according to data compiled by Bloomberg.

ZoomInfo has seven buy-equivalent ratings, with eight analysts recommending to hold the shares and none advising clients to sell, according to data compiled by Bloomberg. The average 12-month price target of $56 implies shares have upside of just 13% from Monday’s level.

ZoomInfo offers the “Holy Grail of Sales” on a “sales intelligence platform that we believe has best-in-class accuracy and breadth of business professionals’ data,” Panigrahi wrote.

“We expect ZoomInfo to sustain its robust levels of revenue growth and operating margins, benefiting from strong and increasing demand.”

“ZoomInfo’s leading platform of intelligence data allows sales and marketing teams to sell more efficiently and maximize chances of success,” Zlotsky wrote in a note. “We see a $27 billion total addressable market and a truly unique growth/margin profile generating meaningful upside to estimates, which appears priced in at current levels.”

ZoomInfo offers “the leading go-to market intelligence database,” with “leading depth and breadth of data, strong technology, and a strong GTM, resulting in both strong growth and strong margin.” But RBC sees “the current price as reflecting the company’s strengths.”

The firm’s numbers “speak for themselves,” highlighting “an efficient growth engine operating at scale.” But “the prudent move for now is to wait for a better entry point, which often comes with lock-up expirations or the passage of time.”