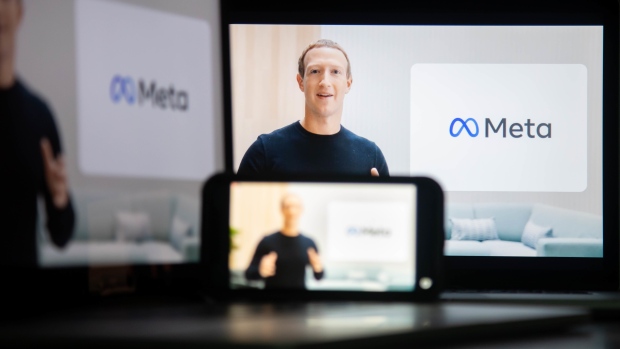 Mark Zuckerberg, chief executive officer of Facebook Inc., speaks during the virtual Facebook Connect event, where the company announced its rebranding as Meta, in New York, U.S., on Thursday, Oct. 28, 2021. A major theme at the annual conference will be the company's ambitions for the so-called metaverse, a new digital space that it believes will supplant smartphone apps as the primary form of online interaction. , Bloomberg

(Bloomberg) -- Mark Zuckerberg unveiled a list of principles for work at Meta Platforms Inc. in which he calls its employees “Metamates.”

The founder of Facebook, which changed its name in December to reflect a newfound focus on the so-called metaverse, laid out his vision for internal culture in an employee memo he shared on Tuesday. The familiar Move Fast motto remains, joined by Build Awesome Things, Live in the Future, Focus on Long-Term Impact and Be Direct and Respect Your Colleagues.

Meta’s chief executive officer said it is now “a distributed company” and gave a nod to its international nature by saying “we will continue hiring around the world.”

Zuckerberg mentioned the employee label in his conclusion: Meta, Metamates, Me. As explained by Meta executive Andrew Bosworth on Twitter, it’s a naval reference. “It’s about the sense of responsibility we have for our collective success and to each other as teammates,” Zuckerberg wrote.

His post generated a mix of enthusiasm and derision online. Some social media users pointed out the slogan put the company first and the worker last. Others applauded the billionaire’s comments.

Meta has weathered a succession of hits to its public image in recent times after whistle-blower Frances Haugen ignited debate about whether the company prioritized profit over social responsibility. This month, the Facebook parent lost about $251.3 billion of market value after unveiling disappointing results, the biggest wipeout in market value for any U.S. company ever.