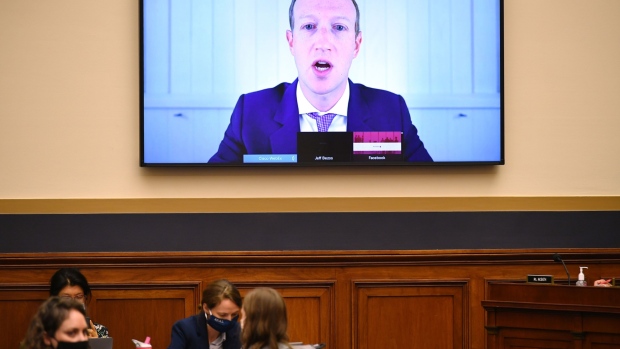 During Wednesday’s testimony before a Congressional antitrust panel, Mark Zuckerberg went off-script a little bit -- at least the script we expected -- pointing out how Facebook Inc. lags behind a number of competitors, including Alphabet Inc., Amazon.com Inc. and Apple Inc.

Zuckerberg isn’t hesitating to use some sharp elbows, pointing out that Amazon is the fastest-growing advertising platform and Google is the biggest.

“In many areas, we are behind our competitors,” Zuckerberg said. “The most popular messaging service in the U.S. is iMessage. The fastest growing app is TikTok. The most popular app for video is YouTube. The fastest growing ads platform is Amazon. The largest ads platform is Google. And for every dollar spent on advertising in the U.S., less than ten cents is spent with us.”

This is why the executives likely preferred to appear at once -- it allows them to spread the burden. The antitrust case against Google and Facebook is far stronger than the one against Apple, for instance.