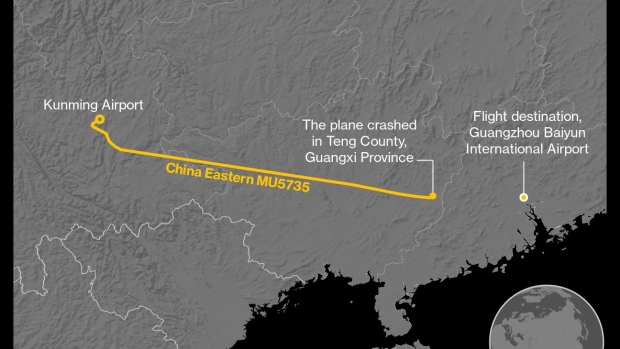 (Bloomberg) -- The Boeing Co. 737-800 NG model that crashed in China on Monday is considered one of the safest aircraft ever made.

The China Eastern Airlines Corp. jetliner carrying 132 people from Kunming in Yunnan province to the manufacturing center of Guangzhou fell rapidly from cruising altitude, according to Flightradar24.

The six-year-old single-aisle jet is part of the NG, or Next Generation, era that preceded the 737 Max, which was subjected to a global grounding after two deadly crashes. The NG has one of the best safety records among all aircraft, with just 11 fatal accidents out of more than 7,000 planes delivered since 1997, according to aviation consultancy Cirium.

“The 737 NG has been in operation for 25 years and has an excellent safety record,” said Paul Hayes, director of air safety and insurance at Cirium. “I’m not going to speculate on what happened but if the Flightfadar24 logs are accurate, something seems to have happened abruptly and the plane nose dived from cruising altitude.”

The most recent fatal crash of a 737-800 before Monday came in August 2020, when an Air India Express flight slid off the runway in Kozhikode, India, killing 21 people. An investigation blamed pilot error.

China Eastern Flight MU5735 sank more than 25,000 feet in the span of just over 2 1/2 minutes, based on Flightradar24 data. It remained at cruising speed of about 455 knots until about 19 seconds before the end of the data collection.

According to Airsafe.com, which tracks aviation safety, NG models had just 0.07 fatal crashes per million flights as of 2019. That puts it among a rare group that includes the Boeing 747-400 and 737’s main competitor, the Airbus SE A320 family.

The 737 Max had just been in service for less than two years when it was grounded worldwide in March 2019, after two crashes that killed 346 people. China was the first country to idle the plane and, while it was re-certified there in December following adjustments, the plane hasn’t yet been used for commercial flights.

Boeing sent a 737 Max to its new completion and delivery center in Zhoushan, China, earlier this month. Investors sent Boeing shares down as much as 9% in premarket U.S. trading. They were down about 6.4% from Friday’s close at 7:45 a.m. in New York.

“The NG is a completely different aircraft from the 737 Max, which has just gone through a rigorous recertification process,” said aerospace industry analyst John Strickland. “I wouldn’t expect today’s crash to have any bearing on the Max return to service in China.”

“We are aware of the initial media reports and are working to gather more information,” Boeing said in an emailed statement.