For energy companies still in Russia, it's not a 'pull the plug and leave' situation: Analyst

On the face of it, a time of “pandemic, drought, wildfires, civil unrest, and now war in Europe” doesn't sound like a great business environment. Unless you’re a commodity trader.

The world’s dealers of raw materials are the lubricant of global commerce, and when there's a lot of friction, as there has been since 2020, you need a lot of grease. For the traders, that translates into dollars; lots of them

Consultant Oliver Wyman, whose annual review of the sector provides some visibility into a largely opaque world, reports that the industry generated cash like never before in 2021. The firm’s analysis includes not just the independent merchants — such as Vitol Group and Trafigura Group – but also the in-house trading business of the oil majors and the big utilities. Their combined gross margin, a proxy for profitability, surged to an all-time high of about US$61 billion, surpassing the 2008 peak during the last commodity boom, according to Oliver Wyman. 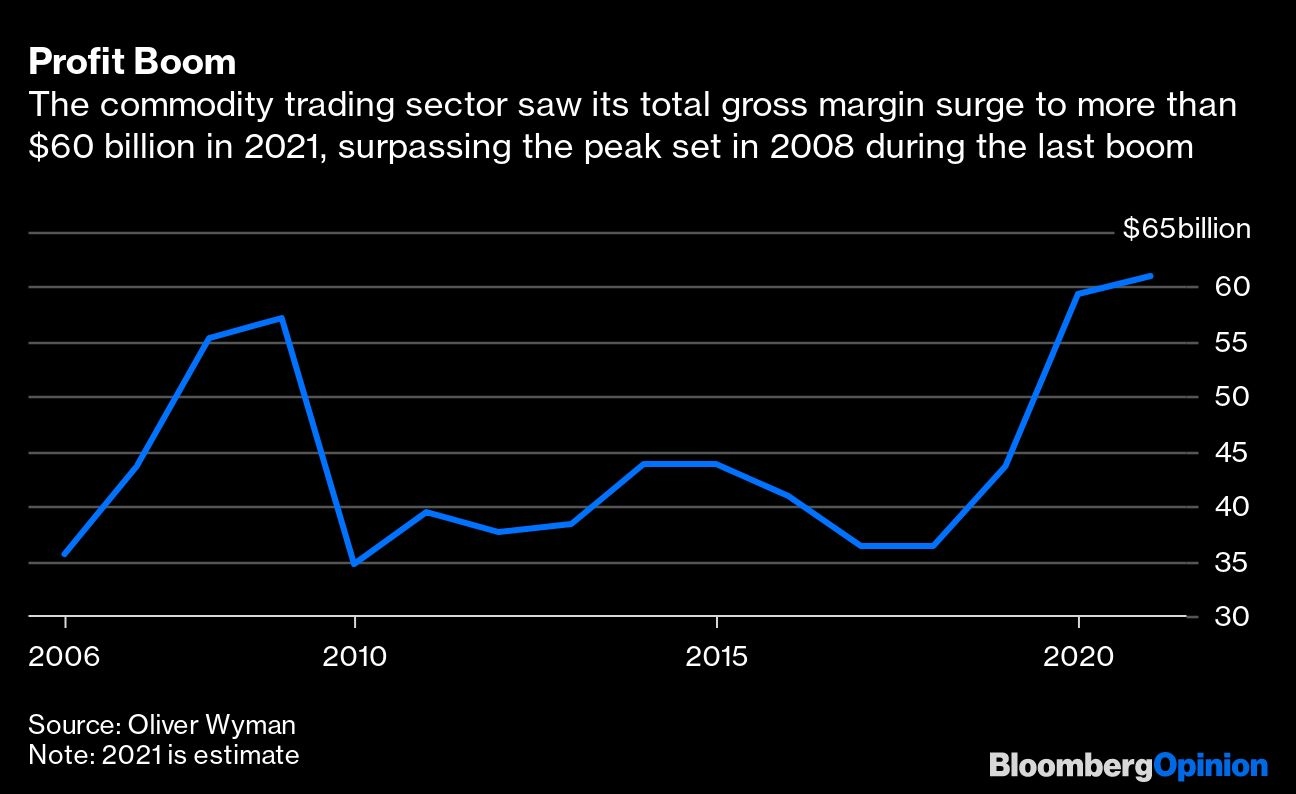 The bonanza, which has continued into this year, comes as traders face the most volatile market in several generations. The Bloomberg Commodity Spot index earlier this month posted a weekly jump of more than 13 per cent — the largest one-week price increase in data going back more than 60 years ago.

As in 2020 and 2021, volatility is a sure path to strong profits for commodity traders. At least, that’s if they can survive long enough to collect their winnings. Right now, the industry is struggling. In a letter to governments and regulators, the lobby group for the European energy traders warned of “intolerable cash-liquidity pressure” across the sector. In some cases, trading houses have “exhausted” their credit lines. The solution, according to the European Federation of Energy Traders (EFET), is a bailout. Or, in the more politically correct words of the lobby group, a “time-limited emergency liquidity support” from governments or central banks.

Cynics could be forgiven for having a case of déjà vu, having experienced the rescue that Wall Street got after the banking collapse of 2008. Then, as critics liked to point out, the profits of the pre-crisis golden years were privatized and the losses that followed were socialized.

The Oliver Wyman report shows the size of those privatized profits in the commodity sector: gross margin reached a cumulative US$160 billion in the three years from 2019 to 2021. That sky-high gross margin made its way into record net profits, and then into eye-watering dividends. In an industry that remains largely privately owned, that means they went largely to the senior executives and the top traders. For example, Vitol, the world’s top oil trading house,  paid a record US$2.9 billion to its executives and staff through share buybacks in 2021. Trafigura paid its traders-cum-shareholders US$1.1 billion last year.

If traders need extra liquidity, as their lobby group suggested, chief financial officers should start by looking inward: Tap the very same executives who enjoyed the riches of recent years. I can’t think of any other business that can organize an emergency equity raising in a shorter time frame than the commodities sector. Depending of their size, each company should be able to raise dozens, hundreds of millions — even a billion  dollars — from within their own ranks. There’s a reason why some of their owners are ranked among the world’s billionaires. Among the publicly listed companies, the first call should be to their own shareholders and bondholders.

The liquidity problem is real. EFET said in its letter that traders were receiving margin calls of US$500 million a day, per company, due to volatility and high prices, up from US$50 million in the past. Talking to industry executives in recent days, I have heard of even larger margin calls, running into the billions of dollars.

But rather than central banks, the first stop to resolve the problem lies among the very same traders, as Caglar Sabanci, head of commodity finance at Erste Group Bank AG, has argued.  To date, we have yet to see an emergency rights issues and equity dilution among the lobby group’s members. There’s precedent: In 2015, Glencore raised US$2.5 billion in fresh equity to avert a crisis. Ivan Glasenberg, at the time the company’s chief executive officer, and his lieutenants provided nearly a quarter of that amount from their own pockets. Only if such an effort now fails should taxpayer money be sought — and any of that could very well come with strings attached. In other words, be careful what you wish for.