The bar is extremely high at Apple for product development: Analyst

Consumer payments-focused startups Klarna Bank AB, Afterpay Ltd. and Affirm Holdings have a had a good run at changing how people shop and growing rapidly until recently. Now, much bigger players look like they’re gearing up to streamroll the little guys.

Apple Inc. launched an installment-payments feature Monday among a string of product updates. It’s a prime example, along with JPMorgan Chase & Co., of big tech and finance incumbents turning their attention and investment dollars toward areas that young companies have made their own.

The big groups are cranking up the pressure just as slowing economies threaten consumer spending and regulators zero in on fintech. Klarna, for one, is tightening lending terms and cutting staff to focus on profitability in response. Buy Now Pay Later is turning into Pay Now Grow Later. This doesn’t just apply to the startups: Previous cycles in consumer finance show those companies that can continue to invest during the tough times often emerge as winners after the storm.

Apple Pay Later is part of the tech giant’s efforts to create and control more financial products and capabilities itself after years of mainly relying on third parties. The aim is to make money from fees, obviously, but also to capture more of the data on shopping and spending habits that will help it market more services to customers.

Some of the story for JPMorgan’s hefty technology spending is similar: rebuilding its IT systems and investing billions in the payments side of its businesses are strategies to help the bank better capture, analyze and use all the data generated by clients.

For Buy Now Pay Later businesses, higher costs are coming too in the form of expected regulation, led by the UK, which wants to ensure these products are properly treated as a form of lending that add to people’s debt burden. The bigger banks that are waking up to these products already bear these regulatory costs and the marginal addition to their expenses won’t be great, while big tech companies have much larger revenue bases that can absorb more fixed costs without eroding profits much.

Smaller companies will also be hurt more by the cost of problem loans if the economic downturn worsens. This all contributes to the expectation that Klarna’s pending fundraising round will value it at potentially one-third less than the $46 billion it achieved in its capital raise a year ago. That wouldn’t be surprising, according to Bloomberg Intelligence; shares in larger, listed fintechs like PayPal Holdings Inc. and Block Inc, which bought Australia’s Afterpay in a blockbuster deal last year, are down more than 50 per cent in the past six months. Affirm Holdings is down 81 per cent. 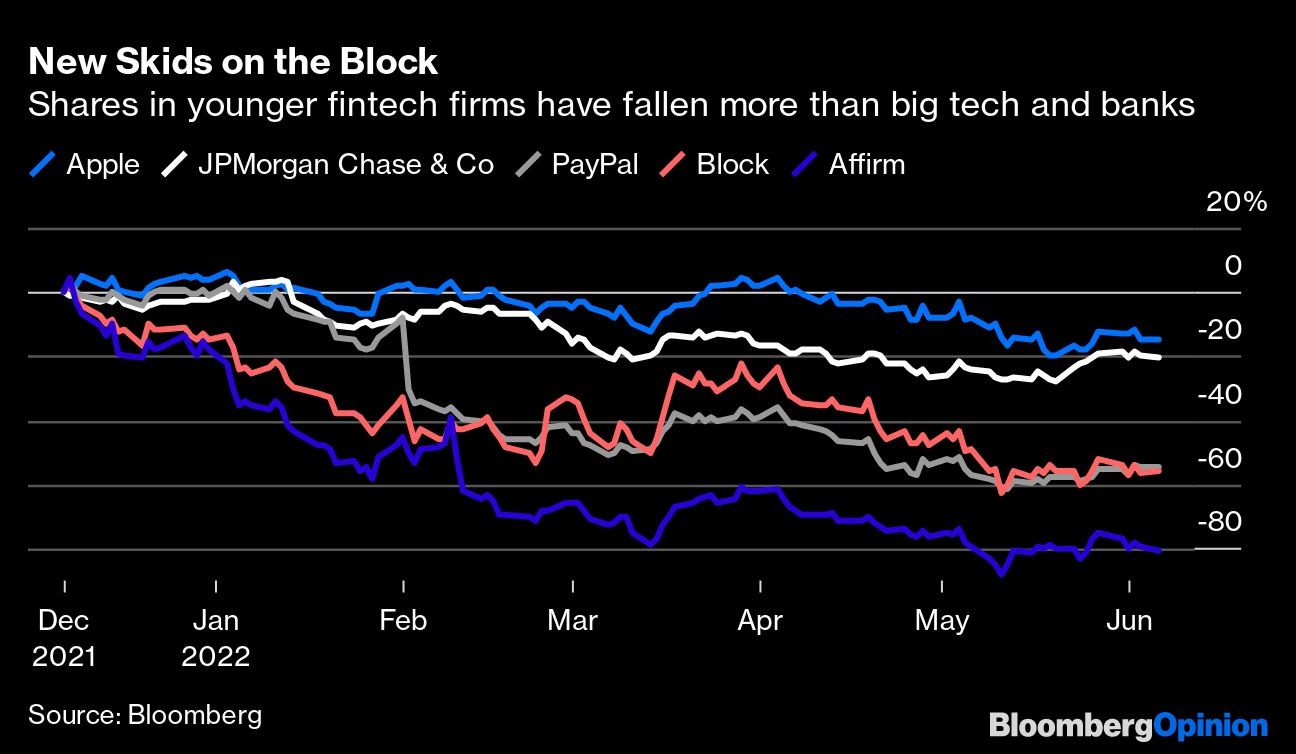 Of course, the large banks and credit card companies will suffer credit losses too, but with a broader spread of customers and more seasoned books of debt, the pain ought to be much less.

It might still sound counterintuitive to invest in growth efforts during a downturn, but it’s been done before. There’s a classic case in the UK in consumer finance: When growth slowed and interest rates spiked as high as 12.5 per cent in Britain in the early 1990s, Barclaycard invested heavily in a long-lasting advertising blitz starring comedian Rowan Atkinson (Mr. Bean and Blackadder) as a secret agent.

The bank needed to keep borrowers engaged and to explain why its new annual membership fee and benefits like purchase insurance or international rescue were worth having. By the time the economy was recovering later in the decade, Barclaycard had grown its market share and revenue. The brand of its main rival, Access, was then shut down by the rival banks that ran it.

Don’t be surprised to see big brands like Apple and JPMorgan raise their advertising spending for these kinds of products over the next few years. It’s no guarantee of success, but when economies kick into a higher gear again, those who can afford to pay up for customers’ attention now will have a better chance of growth later.