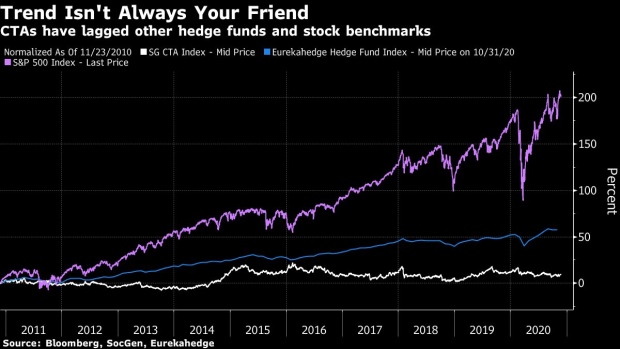 (Bloomberg) -- Martin Lueck has already watched one systematic trading program reach the end of its shelf life when he was building a pioneering quant hedge fund in the 1980s.

Now, the 59-year-old is confronting a fresh existential crisis in the world of Commodity Trading Advisors, who typically make money by riding trends in financial futures.

CTAs have lost 2% this year, a Societe Generale SA index shows, extending more than a decade of underperformance. At Lueck’s current $8.4 billion shop, Aspect Capital, its Diversified Trends fund is down 11%.

“The days of expecting a hedge-fund manager is going to be able to deliver double-digit returns consistently -- I think that’s unrealistic,” the co-founder said in a phone interview from London.

That the masters of the universe are lowering a bar they once set is a sign of how much markets have changed. Lueck was the ‘L’ of AHL, a trio of physicists whose fund became the crown jewel of the world’s largest listed hedge fund, Man Group Plc. It would eventually phase out Mint Investment Management -- another CTA whose returns were dimming at the time.

Today, pretty much all CTAs are struggling. Some skeptics argue trend following has become too crowded. Others say its rigid rules can’t beat a market with record-low volatility punctuated by record swings.

In early November, for instance, news of vaccine progress battered CTAs by abruptly reversing bearish trends in everything from Treasuries to oil.

“Sharp-edged regime changes are more difficult to navigate because portfolios are generally either over-exposed or under-exposed either side of the jump,” Lueck said.

While quants need some volatility to make money, this year’s unpredictable reversals have whipsawed trend systems, which mostly take a medium-term view. In late February, the S&P 500 staged its fastest-ever plunge into a bear market, before gaining 40% in just three months.

That has left CTAs underexposed to a stock rally boosting returns for portfolios all over Wall Street, while gains in other asset classes this year are proving too modest to compensate.

Given the propensity for today’s markets to shift quickly from melt-ups to meltdowns, Aspect has adjusted its rules so trading bets won’t get too large even when volatility is muted. It has also made its strategy more reactive to short trends that last just a week or two, while reducing allocations on the basis of medium-term signals.

“I can’t stand still in my trend research, in my refinements of all of these models, but it’s always been that way,” Lueck said.

Since its late 2010 inception, the Diversified Trends UCITS fund has gained about 11%, while the Eurekahedge Hedge Fund Index is up 53%.

To believers like Aspect manager, trend following still works because it captures the human tendency to jump on the bandwagon over time. It’s just that investors need to dig deeper for less-crowded trades.

As correlations in traditional securities rise, the firm has found more value in alternative markets from South African maize to electricity. Lueck is confident the regulatory climate will soon permit the firm to add Chinese onshore futures to its portfolios.

Aspect has also branched out of trend following to offer alternative risk premia and macro investing styles. It has recently started trading option strategies with its own money, with the potential of opening that to clients.

It’s not yet clear if the firm’s adjustments can help restore CTAs to their former glory. While Lueck is not convinced markets are fundamentally any different these days, the University of Oxford alum recognizes new forces are at work -- not least his own son.

“He’s buying and selling things from his college dorm room on Robinhood or Ameritrade at the press of a button,” Lueck said. “What technology has done is disintermediate the more thoughtful -- whether they’re quant or discretionary -- managers and put a huge weight of money in a very responsive, fickle retail audience.”