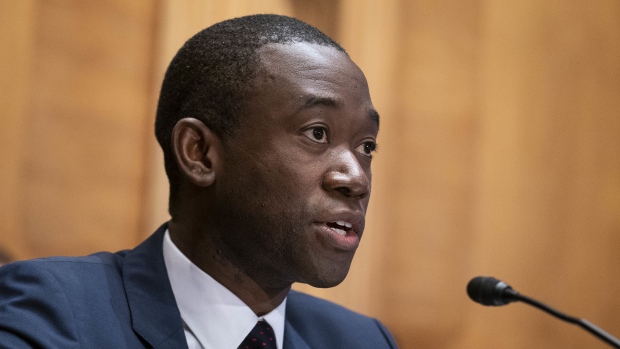 Wally Adeyemo, deputy U.S. Treasury secretary, speaks during a Senate Banking, Housing, and Urban Affairs Committee hearing in Washington, D.C., U.S., on Tuesday, Oct. 19, 2021. The rise of digital currencies and a decline in the use of the dollar by U.S. adversaries are driving calls for a more multilateral approach to sanctions policy at the Treasury Department as the U.S. tries to keep up with changes in the global financial system. , Bloomberg

(Bloomberg) -- Deputy Treasury Secretary Wally Adeyemo warned representatives from several foreign banks Friday about risks to their institutions should they assist Russia in evading sanctions imposed by the US and its allies after the invasion of Ukraine.

Adeyemo met with representatives from several foreign financial institutions and “conveyed the risks of facilitating sanctions evasions,” including the risk of falling under US sanctions if the banks provided material support to a person or entity that the US has already penalized, according to a Treasury Department press release about the meeting.

The Treasury’s Office of Foreign Assets Control, which implements and enforces sanctions policy, “expects all financial institutions to do their own due diligence to ensure they are not transacting with a sanctioned person,” the department said in the release.

The meeting took place in New York at the offices of the Institute of International Bankers, an industry group representing international banks operating in the US.

Adeyemo also heard from members of the industry group about how they are changing their business operations following Russia’s assault on Ukraine and making efforts to improve their sanctions compliance, according the the Treasury release.