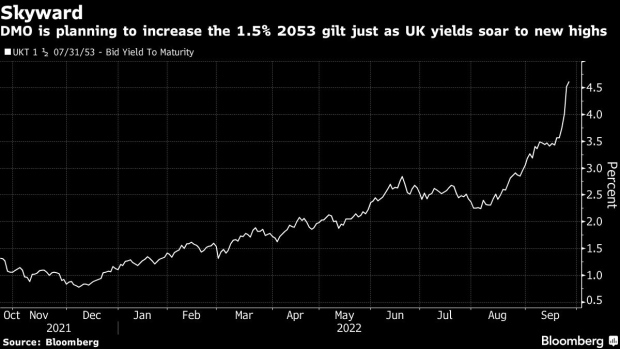 The nacelle of an offshore wind turbine at the Scroby Sands Wind Farm, operated by E.ON SE, near Great Yarmouth, UK, on Friday, May 13, 2022. The UK will introduce new laws for energy to enable a fast build out of renewables and nuclear power stations as set out in the government’s energy security strategy last month. Photographer: Chris Ratcliffe/Bloomberg , Bloomberg

The UK’s green bond sale has already pulled in more than £24 billion ($25.7 billion) of orders as investors snap up yields at their highest since 1998 amid a market meltdown.

It’s the first major examination of UK debt demand after a rout triggered by the new government’s economic plans to ramp up borrowing. While the bidding is about five times the amount expected to be sold by the Debt Management Office, the previous offering of the green bond last year drew a much heftier £74 billion orderbook.

It’s “just not the market that the DMO wanted to issue paper in,” said Pooja Kumra, senior European rates strategist at TD Securities. “My key concern is how the markets absorb the paper post pricing.”

The bond, which matures in 2053, is being offered at 1 basis points above an outstanding 2052 bond, according to a person familiar with the matter, who asked not to be identified because they’re not authorized to speak about it. The transaction, delayed after the death of Queen Elizabeth II earlier this month, is expected by NatWest to raise around £5 billion ($5.4 billion).

Yet bondholders have taken fright after Chancellor Kwasi Kwarteng on Friday unveiled the country’s biggest fiscal giveaway in half a century and the DMO lifted its bond sales for this fiscal year by about £62 billion. Long maturity bonds extended losses on Wednesday as the sale process started, with 30-year yields soaring above 5%.

The country’s bond supply is surging just as the Bank of England starts to offload gilts from its portfolio, part of efforts to roll back monetary stimulus. Planned tax cuts are also likely to spur inflation, with BOE’s chief economist saying the fiscal policies needed a significant response.

“A lot of investors are going to be nervous about trying to digest that gilt supply over the next few days. This is a big problem,” said Craig Inches, head of rates and cash at Royal London Asset Management.

Moody’s Investors Service warned the UK government that its new mini-budget risks doing lasting damage to the nation’s debt affordability. The assessment came shortly after the International Monetary Fund delivered a stinging rebuke of the tax cuts by calling them excessive and in need of revision.

The new sale is for green bonds, which fund environmental projects and typically pull in strong demand thanks to interest from specialist ethical funds. Yet Caroline Haas, head of climate and ESG capital markets at NatWest, said the outlook for the UK would dominate investor thinking.

“This isn’t a green bond discussion -- it’s a UK risk discussion and what is the view on the UK and sterling,” said Haas. “The intent is the long end so that in itself creates issues around inflation and where long gilts are going.”

(Updates with details of sale.)