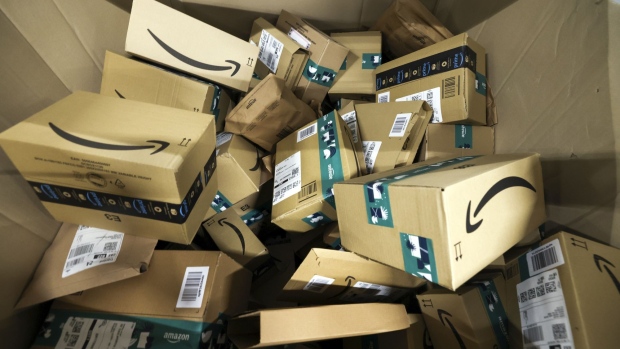 Items for final delivery at an Amazon.com Inc. fulfilment center in Swindon, U.K., on Tuesday, Nov. 23, 2021. Amazon.com Inc. shares rose on Friday, with the e-commerce company extending a recent advance that has put it on track to close at a record for the first time since July. Photographer: Chris Ratcliffe/Bloomberg , Bloomberg

(Bloomberg) -- Amazon.com Inc. was unable to escape a lawsuit filed by a convicted murderer who claims the company’s refusal to hire him as a delivery driver was discrimination.

Henry Franklin applied in 2019 for a job delivering groceries to customers of Whole Foods, an Amazon unit. He’d been paroled a year earlier from a New York prison where he served almost 25 years for second-degree murder, according to court records.

Amazon rejected his application and told him it was based on a background check. Franklin sued on behalf of himself and a proposed class of other ex-cons who have been denied jobs with Amazon.

Franklin’s lawyers allege he was rejected based on his criminal history in violation of New York city and state human rights laws. Amazon says Franklin lied on his application when he answered “no” on the question about whether he had a criminal record.

New York laws bar employers from rejecting job applicants based on their criminal histories unless their crimes relate directly to the jobs they applied for or if their hiring would pose an “unreasonable risk” to the public.

In a 19-page ruling Wednesday, U.S. District Court Judge Valerie Caproni concluded Amazon failed to make a case for either of those exceptions.

While Caproni didn’t rule on the merits of the suit, she said Franklin’s crime had no bearing on whether he could delivery groceries. “He was never convicted of a vehicular offense,” she noted.

She also rejected the idea that his long-ago crime conclusively showed that he was a threat to the public.

“The court is sympathetic to defendants’ likely position that they do not want a convicted murderer delivering groceries to their customers’ homes,” she wrote. Nonetheless, she added, Franklin adequately argued that “he is rehabilitated and no longer poses a threat to the public.”

Franklin’s lawyers argued in court filings that New York state officials determined that he “did not pose an unreasonable risk to anyone’s property, safety, or welfare when it saw fit to parole him.”

As for Franklin’s alleged lie about his criminal record, the judge said that might qualify as a “nondiscriminatory reason for an adverse employment action” -- namely, not hiring him. But she said it was too early in the litigation for Amazon to raise that issue.