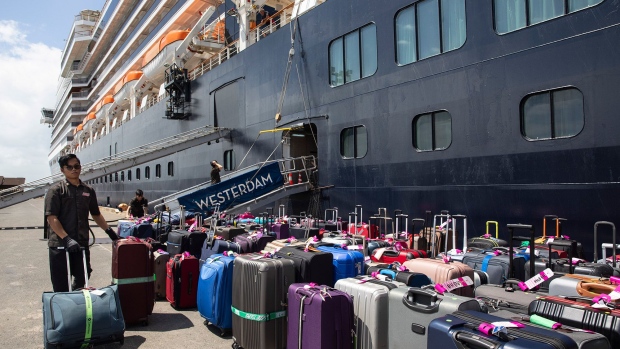 SIHANOUKVILLE - FEBRUARY 14 : Cruise passengers luggage gets unloaded from the MS Westerdam cruise ship after being stranded for two weeks, now docked on February 14, 2020 in Sihanoukville, Cambodia. The ship is completely free from the Coronavirus (COVID-19.) but was turned away from five other Asian ports, it departed Hong Kong February 1st with 1,455 passengers and 802 crew on board. Another cruise ship is in quarantine in Japan with more than 200 infections. The Coronavirus cases rise to more than 64,000 people, total number of deaths is approximately 1,383. (Photo by Paula Bronstein/Getty Images) , Photographer: Paula Bronstein/Getty Images AsiaPac

(Bloomberg) -- An 83-year-old American passenger of the luxury cruise ship Westerdam was diagnosed with the coronavirus a day after more than 2,200 passengers and crew disembarked in Cambodia after being turned away by five other ports.

The ship was allowed to dock in the port city of Sihanoukville on Friday after being barred by countries including Japan and Thailand over fears it harbored the coronavirus. Cambodian Prime Minister Hun Sen, who has been skeptical of the severity of the virus, personally distributed roses and shook hands with the Westerdam’s passengers as they disembarked.

The woman with the virus and her husband were among 145 passengers who flew to Malaysia on Feb. 14, Malaysia’s health ministry said in a statement. She was found with symptoms when she landed in Kuala Lumpur and sent to a hospital designated for outbreak cases. She’s been placed in isolation and is in a stable condition. Her 85-year-old husband has tested negative but placed under observation.

Cambodia had done health screenings on the passengers and cleared them to go back to their respective countries, Malaysia’s health ministry said in the statement.

Cruise ships have become a high-profile symbol of governments around the world struggling to contain the outbreak. The Diamond Princess and its 3,700 passengers are quarantined in the port of Yokohama, Japan, as authorities battle an increasing number of infections on board. Like the Westerdam, the Diamond Princess operates under a brand owned by Miami-based cruise giant Carnival.

The Westerdam spent two weeks looking for a port as Taiwan, Japan, the Philippines and Guam rejected the ship on concerns over the virus, which has killed more than 1,500 people since the outbreak started in central China late last year.

The Westerdam departed Hong Kong on Feb. 1 on a 14-day Taiwan and Japan cruise. The 1,455 guests and 802 crew members were originally scheduled to disembark at Yokohama on Feb. 15. There were more than 600 Americans on board as well as a host of other nationalities.

The Westerdam’s next scheduled voyage, from Yokohama, Japan, on Feb. 15, was canceled, and the cruise line said it’s “assessing the impact of current port restrictions in Asia on cruises departing Feb. 29 or later.”

--With assistance from Anuchit Nguyen and John J. Edwards III.

To contact the reporter on this story: Yudith Ho in Kuala Lumpur at yho35@bloomberg.net

To contact the editors responsible for this story: Sunil Jagtiani at sjagtiani@bloomberg.net, ;Emma O'Brien at eobrien6@bloomberg.net, Andrew Davis, James Amott