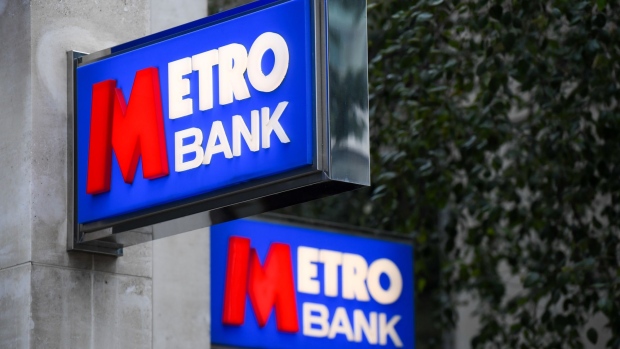 (Bloomberg) -- Apollo Global Management Inc. has abandoned a pursuit of British lender Metro Bank Plc, making it the second buyout firm to decide against an offer for the British lender, according to people familiar with the matter.

New York-based Apollo, which has a track record in financial services investments, approached Metro Bank several weeks ago to express its interest in a potential deal, according to the people. The private equity firm decided in recent days not to proceed with a bid, the people said, asking not to be identified discussing confidential information.

Carlyle Group Inc. said last month it was ending talks to take over the bank, illustrating the obstacles facing dealmaking among the smaller U.K. banks. Requirements to hold regulatory capital make it harder to squeeze out returns and lenders’ branch networks can be expensive to maintain.

Still, financial sponsors have been increasingly weighing deals for banks given the prospect for rising interest rates, which would boost interest income. Representatives for Metro Bank and Apollo declined to comment.

Its image took a hit in 2019, when U.K. regulators began an ongoing investigation into how it misclassified certain assets. It’s also facing increasing competition from branch-free rivals like Monzo Bank Ltd. and Revolut Ltd., as well as JPMorgan Chase & Co.’s new digital retail offering in the U.K.

Willett Advisors LLC, an investment arm for the philanthropic assets of Michael Bloomberg, founder and majority owner of Bloomberg News parent Bloomberg LP, is an investor in Metro Bank, according to regulatory filings.