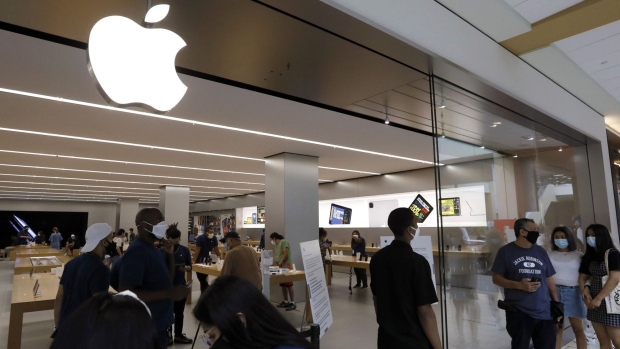 Shoppers stand in line to enter the Apple store at the Queens Center shopping mall in the Queens borough of New York, on Sept. 9, 2020. , Photographer: Peter Foley/Bloomberg

(Bloomberg) -- Apple Inc. on Tuesday ended its longtime card partnership with Barclays Plc, a move designed to focus attention on its own Apple Card product-financing plans.

The Cupertino, California-based technology giant told retail employees in a memo that users will no longer have the option to apply for the credit card in retail stores or via the company’s website starting Sept. 15, the same day it plans to announce two new Apple Watch models and a new iPad Air. Apple told staff that existing cardholders can keeping using the card as a normal credit card.

The Barclaycard Financing Visa deal allowed customers to purchase Apple products at no interest for different amounts of time depending on how much they spent. For example, if a user spent less than $499 on an Apple purchase, they would get six months of no interest payments. If they spent more than $999, they would get the deal for 18 months.

A Barclays representative didn’t have any immediate comment, and Apple didn’t immediately respond to a request for comment.

Barclays counts airlines such as JetBlue Airways Corp. and American Airlines Group Inc. among its biggest U.S. partners. The bank has seen spending on its cards slow as consumers abandoned travel plans during the coronavirus pandemic. Earlier this summer, the bank also temporarily stopped taking new applications for its co-brand credit card with Uber Technologies Inc.

For Apple’s part, it will instead point users to its recently launched Apple Card Monthly Installments plan, which lets Apple Card holders in the U.S. avoid interest payments for six, 12 or 24 months, depending on which Apple device is purchased.

Apple chose Goldman Sachs Group Inc. as its bank partner to launch the Apple Card in the U.S. in August 2019, and the partnership with Barclays started winding down then. That same month, Apple and Barclays ended its rewards program, which gave users three points per dollar spent on Apple purchases as well as gift-card bonuses.