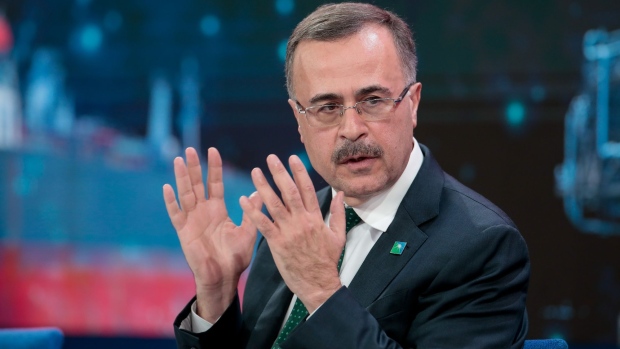 (Bloomberg) -- Oil demand will bounce back to what it was before the coronavirus pandemic crushed energy use last year, and a rout in prices last week was based on unfounded fears of new variants of the disease, the head of Saudi Aramco said.

“We’re very optimistic about demand,” he told reporters in Dhahran, the center of Saudi Arabia’s oil business along the country’s Persian Gulf coast. “We’re seeing a good response from the markets, especially in Asia.”

Crude recouped some its losses on Monday after the end-of-week rout that saw U.S. oil plunge more than 10%, slumping below $70 for the first time since September.

Nasser repeated his forecasts that demand should rebound to more than 100 million barrels a day. That’s roughly the amount of consumption before the pandemic.

Earlier this month, Nasser warned that when jet fuel use rises, it will erode spare oil-producing capacity, requiring more investment.

Nasser was presiding over a contract signing ceremony as Saudi Aramco kicks off commercial development at its giant Jafurah natural gas reservoir. Close to the massive Ghawar oil field in eastern Saudi Arabia, Jafurah is set to begin producing in 2024 and pump about 2 billion standard cubic feet of gas per day by the end of the decade.

Aramco signed about $10 billion of contracts at today’s ceremony with companies including Baker Hughes Co., Halliburton Co., Schlumberger Ltd., Saipem SpA and Samsung Engineering Co. Total investment in the field will reach about $100 billion, Aramco said in a statement after the ceremony.

Gas from the field will go to supporting Saudi Arabia’s plan to stop using crude and fuel oil in its power plants, and to develop blue hydrogen production, Nasser said. Gas emits polluting carbon dioxide though it burns more cleanly than liquid fuels or coal, which still fires many plants globally.

Blue hydrogen is produced from gas with technology to capture the carbon emissions. The Jafurah project will help Saudi Arabia meet its target to have net-zero carbon emissions by 2060, Nasser said.