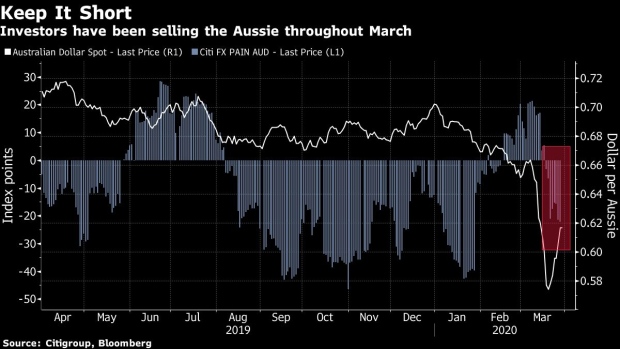 The downtrodden Australian dollar is poised to bounce back, but the road to recovery from a 2002 low is likely to be bumpy.

After suffering its biggest quarterly loss since 2008, the Aussie could climb as much as 13% to 70 U.S. cents by year-end, according to strategists. Valuations, stimulus from Australian authorities and an expected recovery in China’s economy will drive the rebound.

The risk-sensitive Aussie has underperformed all but one of its Group-of-10 peers in the past three months as the coronavirus outbreak spurs a flight to safety. The currency’s ability to rise will serve as a verdict on the Reserve Bank of Australia’s foray into quantitative easing, which has seen policy makers purchase bonds and slash rates to prop up the economy.

“We could get back toward the high 60 to 70 U.S. cents area -- the question is when,” said Rob Holder, asset allocation specialist for Crestone Wealth Management Ltd. in Melbourne. “It wouldn’t surprise me to see a reasonably sharp rebound once the pandemic dies down.”

The Aussie slumped to a 2002 low in March as the global spread of the virus threatened to tip the world economy into a recession. The currency slid almost 13% in the past three months, due partly to fears of a liquidity squeeze which prompted investors to hoard dollars for safety.

As the virus brought the Australian economy to a virtual standstill, the government unveiled a A$130 billion ($80.3 billion) rescue package and the central bank joined peers in Japan and Europe in buying bonds to calm jittery markets.

The pace of the currency’s rebound will depend on how fast China’s economy recovers, given that it’s Australia’s largest trading partner, said Patrick Bennett, a strategist at Canadian Imperial Bank of Commerce in Hong Kong.

The world’s second-largest economy appears to be on the mend, although underlying momentum remains weak. An index of eight indicators tracked by Bloomberg rose from its lowest last month and a Standard Chartered Plc survey showed confidence at China’s smaller companies rebounded in March from a record low in February.

“Asia and China probably stand to come out a bit more swiftly than others from the virus, and that will benefit Australia,” Bennett said. “Where the currency is now versus the terms of trade on a long-term basis, it’s way cheap.”

Not everyone is convinced.

The currency is likely to end the year at around 63 U.S. cents, not far from current levels, with sentiment expected to remain hostage to virus fears, according to National Australia Bank Ltd. strategist Rodrigo Catril.

The risks are clear. Soaring infections in the U.S. threaten to shut down the world’s biggest economy until June while China has warned that a rebound in its purchasing manager’s index in March doesn’t necessarily portend a recovery.

For S&P Global Ratings, the recent stabilization in global sentiment may aid the Aussie’s recovery to 65 U.S. cents by the fourth quarter.

“Markets have fully priced in the new unconventional monetary policy regime of the RBA,” said Shaun Roache, Asia-Pacific chief economist at S&P in Singapore. “Efforts by the Fed to introduce swap lines with G-10 countries have also taken some pressure off the likes of the Aussie.”