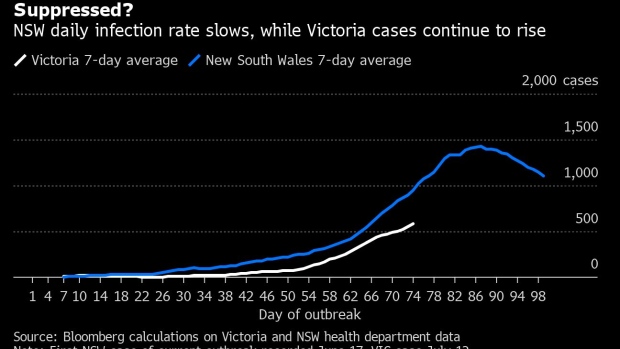 SYDNEY, AUSTRALIA - SEPTEMBER 19: A couple gather for a picnic in a painted circle for social distancing measures in Tumbalong Park on September 19, 2021 in Sydney, Australia. COVID-19 restrictions have eased for people in NSW who are fully vaccinated, with up to five people allowed to gather outdoors. The eased restrictions only apply to people who don't live in the 12 local government areas of concern and have received two doses of a COVID-19 vaccine. NSW Premier Gladys Berejiklian has outlined a roadmap out of the current statewide lockdown, with a range of restrictions to be eased when 70% of the state's eligible population are fully vaccinated. These freedoms will only be restored for the fully vaccinated. (Photo by James D. Morgan/Getty Images) , Photographer: James D. Morgan/Getty Images AsiaPac

(Bloomberg) -- The delta outbreak in Australia’s most populous state appears to be slowing, after a months-long lockdown and mass vaccination effort in New South Wales.

The state recorded six deaths and 1,063 cases on Thursday as health officials reported almost 56% of its population had been fully vaccinated. The state’s 7-day moving average fell to its lowest since Sept. 1, according to Bloomberg calculations on health department data.

New South Wales saw a change in trajectory once half their adult population had been fully vaccinated, so “if we all get vaccinated, we’ll drive down these numbers,” Andrews said.