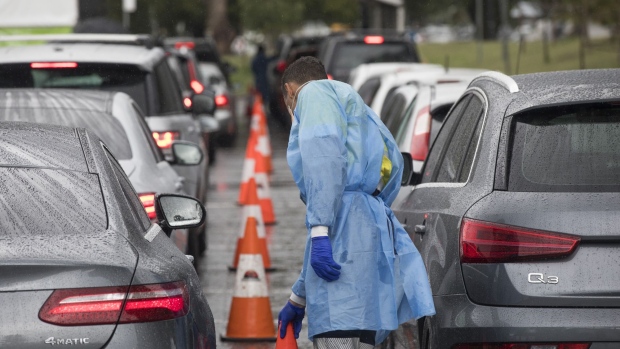 Australia reported more than 100,000 new Covid-19 cases for the first time in a single day, as home test results were included and some restrictions were reintroduced to ease pressure on a health system stressed by the fast-spreading omicron variant.

Victoria state reported 51,356 cases on Saturday, more than double the day before, as it started counting results from rapid tests for the first time. Some 26,428 of the positive results came from the newly admitted tests, according to a government statement.

In New South Wales, cases climbed to 45,098, with 1,795 people hospitalized. The states recorded nine deaths each.

The surge comes as Victoria and New South Wales moved to suspend non-urgent surgeries and implemented new limitations on socializing to try to manage the pressure on its hospitals.

In New South Wales, where Sydney is the state capital, officials are bracing for hospitalization numbers to more than double to a peak of 4,700 by late January. Reversing protocol from earlier in the pandemic, hospitals in the state are starting to treat patients with and without the virus in the same ward, The Sydney Morning Herald reported on Saturday.

Cases have skyrocketed across the country in recent weeks, with Australia Treasurer Josh Frydenberg and former Prime Minister Malcolm Turnbull among the latest high-profile people to contract the virus.

Amid a nationwide shortage in rapid antigen tests, the Australian government on Saturday moved to restrict “improper export” of the kits, and banned the re-sale of tests bought from retail outlets at prices higher than 120% above the purchase price. The government is also considering capping the number of tests people can buy at any one time in an effort to prevent hoarding.