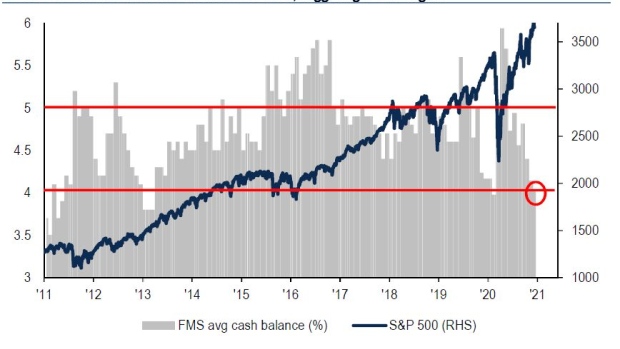 (Bloomberg) -- Optimistic about a return to economic growth, fund managers have been slashing their cash positions and embracing risk assets to an extent that’s raising red flags for strategists at Bank of America Corp.

Money managers overseeing $534 billion in total are underweight cash for the first time since May 2013, with levels down to 4%, according to a BofA survey that took place Dec. 4 through Dec. 10. Investors are the most bullish on stocks and commodities -- the so-called “risk-on” assets -- since February 2011, while the Bitcoin rose in the list of the most crowded trades, according to BofA. The plunge in cash exposure is setting off the broker’s sell signal for equities.

“Investor sentiment is bullish as vaccine hopes induce strong ‘buy the reopening’ trade,” said BofA strategists led by Michael Hartnett in a note. “We say sell the vaccine in the first quarter 2021.”

BofA is weighing in on the dilemma that many market players face at the end of the year: whether to reap the returns in stocks and turn defensive now, or continue buying on bets that the rally can extend into 2021.

The surveyed investors were also the most optimistic on equities since January 2018, while hedge funds’ exposure to stocks remains elevated at 43%, according to BofA.

The drop in cash levels and upbeat outlook on growth signal an early-stage economic recovery similar to those seen after the 2008 financial crisis and the dot-com bubble, BofA said.

“Recovery expectations have also surpassed prior recessions in both speed and magnitude,” the strategists said.

When exiting cash, money managers pounced on value, emerging-market, U.K., banking and consumer discretionary stocks, while reducing exposure to U.S. and health-care equities as well as bonds. Among surveyed investors, 42% expect the Covid-19 vaccine to start boosting economic growth in the second quarter of 2021, while a record 76% forecast a steeper yield curve.

But although 31% of surveyed money managers believe cheaper value stocks can outperform growth stocks -- the second-highest number since 2014 -- a long in technology shares remains the most-crowded trade, followed by a short in the U.S. dollar and a long in the Bitcoin.