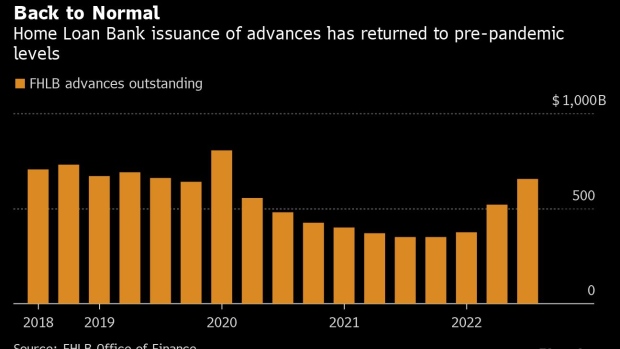 Jerome Powell, chairman of the U.S. Federal Reserve, speaks during a Senate Banking, Housing and Urban Affairs Committee hearing in Washington, D.C., U.S., on Tuesday, Nov. 30, 2021. The Federal Reserve chair, in his first public remarks on the omicron variant of the coronavirus, said it poses risks to both sides of the central bank's mandate to achieve stable prices and maximum employment. , Bloomberg

(Bloomberg) -- Banks are starting to have a tougher time obtaining funds in the financial system as the Federal Reserve shrinks its balance sheet and hikes interest rates, leaving analysts searching for any signs that the strains are approaching the magnitude of past credit crunches.

Short-term funding rates are already rising as banks return to the markets for cash, a phenomenon that analysts anticipated, while balances at the Fed’s reverse repo facility have begun to ebb. These are among the indications of incipient funding pressures.

US dollar funding markets are hardly on the verge of imploding, as they were at the end of the central bank’s last quantitative-tightening episode in 2019. Back then, banks’ excess reserves parked at the Fed were depleted, leaving the institutions without any cash available to lend.

“There are clear signs banks are having to compete more aggressively for funding,” said Mark Cabana, head of US interest rates strategy at Bank of America Corp. “This is a perfectly natural and expected part of the tightening of monetary policy, both through rate hikes and QT.”

Fed Chair Jerome Powell has assured investors that funds are not yet scarce, but the challenge is that it’s still impossible to know for sure what banks’ minimal comfort level is.

Since the Fed kicked off QT six months ago, its balance sheet has shrunk by roughly $330 billion as of Nov. 30, to some $8.58 trillion. Meanwhile, banks’ reserve balances, the part of the liabilities market that analysts have pinpointed as the most affected by the unwind, have dropped by $305 billion, to around $3.05 trillion. That’s still about double where they were before the pandemic struck.

While lenders can afford to shed some cash amassed from the trillions of dollars of fiscal and monetary stimulus unleashed during the pandemic, they’re now starting to turn to other sources for funding. That’s happening as the combination of QT and Fed rate hikes has caused depositors to shift cash from banks to money-market funds and other higher-yielding alternatives.

So that leaves Wall Street parsing the following data from various short-term markets, measures and facilities to assess just how bad the funding strains are getting:

Balances at the Fed’s discount window, normally a last-resort funding source, have risen to the highest since June 2020. Combined with an increase in US banks’ borrowings through other channels, it suggests they’re losing deposits.

The increased tapping of the Fed window indicates that some banks “are already facing more significant short-term liquidity pressure,” Moody’s Investors Service said last week. “Ongoing and increasing discount window usage over the past few months could point toward deeper funding weaknesses in some corners of the banking sector.”

The Federal Home Loan Banks provide funding to members such as commercial banks via advances. These tend to be short-term loans secured by mortgages or other collateral, and banks had little need for them when they were flush with cash.

But advances have returned to pre-pandemic levels, totaling $655 billion as of Sept. 30, up 86% from end-2021, data from the Home Loan Banks’ Office of Finance show. Driving the leap: declining deposit balances, loan growth and the effects of higher Fed rates. Of note, commercial banks were the largest segment of borrowers, with 55% of the total principal amount of advances outstanding at the end of the third quarter.

Trading volumes in the fed funds market are near the highest levels since 2018, signaling growing demand. The jump may have been driven by the Federal Home Loan Banks, the primary lenders in the market, allocating more of their excess cash into fed funds as opposed to alternatives like the repo market.

At the same time, domestic banks’ share of fed funds borrowers has risen to 12% from 5%, according to Barclays Plc. This may be a sign of scarcity, because when reserves were less plentiful in 2018-2019, domestic banks’ share of activity in fed funds also rose, led by institutions “looking to top up their intraday clearing balances,” strategist Joseph Abate wrote in a note.

Now that QT is causing bank deposits to drain faster, it has unleashed more short-term paper into the market in the form of discount notes from home-loan banks. That has helped push up short-term rates on instruments ranging from repurchase agreements to Treasury bills, as investors have more places to park cash. The fiercer competition for funding has also helped lure dollars from institutional money funds, including from the Fed’s reverse repo facility.

As a result, the facility has finally started to drain. It’s down to about $2.1 trillion, after peaking at $2.425 trillion in September.