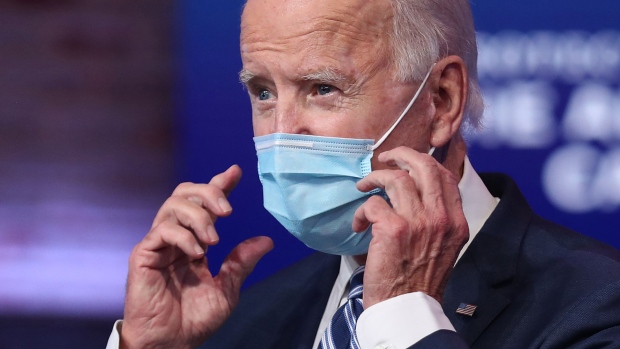 WILMINGTON, DELAWARE - NOVEMBER 10: U.S. President-elect Joe Biden removes his mask to address the media about the Trump Administration’s lawsuit to overturn the Affordable Care Act on November 10, 2020 at the Queen Theater in Wilmington, Delaware. Mr. Biden also answered questions about the process of the transition and how a Biden Administration would work with Republicans. (Photo by Joe Raedle/Getty Images) , Photographer: Joe Raedle/Getty Images North America

President-elect Joe Biden said he would ask all Americans to wear a mask to prevent the spread of the coronavirus for the first 100 days of his administration as well as issue a “standing order” requiring face coverings in federal buildings and on all interstate transportation.

Biden also told CNN in an interview on Thursday that he had spoken to Dr. Anthony Fauci and asked him to stay on as the government’s top infectious disease expert in the Biden administration.

Fauci is director of the National Institute of Allergy and Infectious Diseases, a role he’s held since the Reagan administration. But Biden suggested that Fauci would have an outsized role in his administration, advising the president directly.

“I asked him to stay on the exact same role he’s had for the past several presidents, and I asked him to be a chief medical adviser for me as well, and be part of the Covid team,” Biden said. He noted that his chief of staff, Ron Klain, worked closely with Fauci during the Ebola crisis beginning in 2014.

Biden said he would order mask use “where the federal government has authority.” And he said he would call for all Americans to wear masks for the first 100 days of his presidency. “Not forever, for 100 days,” he said. “And I think we’ll see a significant reduction” in infections.

Biden also said he would follow the lead of three of his predecessors — presidents Bill Clinton, George W. Bush and Barack Obama — who have volunteered to publicly get a Covid vaccine to encourage others to do so.

“I’d be happy to do that. When Dr. Fauci says we have a vaccine that is safe, that’s the moment I will stand before the public,” he said.