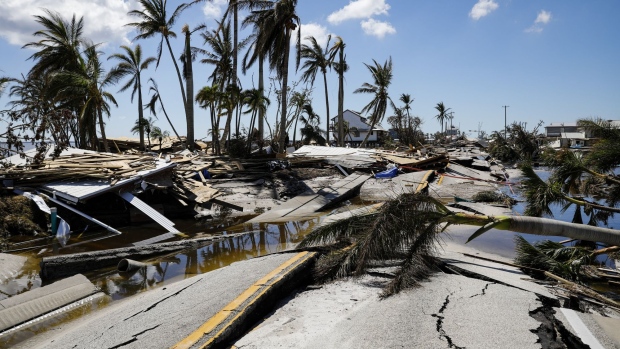 (Bloomberg) -- President Joe Biden will travel to Puerto Rico on Monday and Florida on Wednesday to survey the damage there after vowing to commit the full strength of the federal government to recovery efforts in the wake of two devastating hurricanes.

The president will be accompanied by the first lady, the White House said.

The level of destruction from Hurricane Ian, which Biden on Saturday said was “likely to rank among the worst in the nation’s history,” has left bridges and other infrastructure, along with homes and businesses in ruins, with damage estimates ranging from $68 billion to $100 billion.

Ian made landfall Wednesday and tore across Florida, bringing with it powerful gales and a wall of water that inundated parts of the state. It pummeled South Carolina Friday with violent winds and a deadly storm surge on its way up the East Coast.

In Florida, power was being restored to about half the roughly 1.8 million homes and businesses that lost it. The White House approved federal disaster funding to mobilize debris removal and cover costs of emergency personnel.

Puerto Rico, a US territory, continues to recover from the damages left by Hurricane Fiona, which caused catastrophic flooding and knocked out much of the power on the island.

Power has now been restored to an estimated 91% of customers as of Saturday, according to Luma Energy, a private company managing the island’s power grid since last year.

“It’s gonna take months, years to rebuild,” the president said in an address on Friday.

“I’ve directed that every possible action be taken to save lives and get help to survivors, because every single minute counts. It’s not just a crisis for Florida. This is an American crisis.”