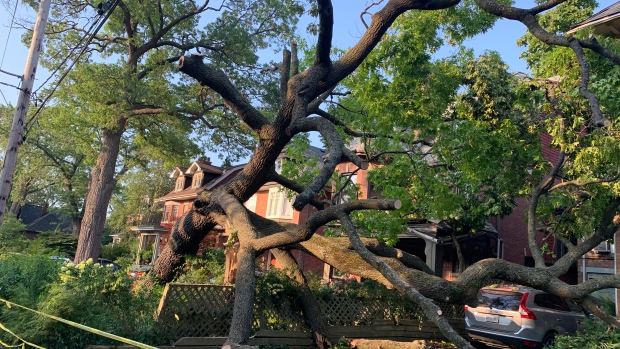 A fallen tree lies on the ground after striking two neighbouring houses in the High Park neighborhood of Toronto on Aug. 20, 2021. , THE CANADIAN PRESS/Jody White

CALGARY -- When a severe storm ripped through parts of southern Ontario on Aug. 26, the old maple tree in Valerie Falcone's front yard was one of the casualties.

"I would say half of it was just blown down. It was just in pieces, and strewn all over the front lawn," said Falcone, who lives in the Alderwood neighbourhood of Toronto. "One of the big branches hit the eavestrough in front, and the eavestrough is slightly hanging now."

It's not the first time Falcone and her husband have dealt with tree damage in the aftermath of high winds and punishing rain. Three years ago, bad weather took out another huge branch of the same maple. It landed in a way that blocked the Falcones' front door until they paid to have it removed.

In St. Catharines, homeowner Sarah McBride has also repeatedly dealt with tree damage -- the most recent incident being a May storm that flung large branches all over her yard, narrowly missing her parked vehicle. There was also a 2019 storm that sent a portion of a tree crashing onto her backyard fence, forcing a complete fence replacement.

"We've had three major incidents with tree branches coming down, barely missing us, or indeed actually hitting our property," McBride said. "It's been storm after storm, and crazy expensive."

"It's not uncommon at all. In fact, it's becoming more common as our weather patterns are changing," Gordon said. "We've been getting really devastating storms."

While most homeowners love the idea of a grand old tree on their property, it can be costly in the event that one comes down. Experts advise people to check their insurance coverage and consider preventive maintenance if they have concerns.

Most home insurance policies will cover the cost of wind storm damage, and that includes damage to property caused by trees as well as tree debris removal.

Glen Gordon, a certified arborist with Tree Doctors in Toronto, said Falcone's and McBride's experiences aren't at all unusual. He said in the last week of August alone, he responded to more than 60 calls for storm damage cleanup and fallen tree removal.

In some cases, the issue is small enough that it's not worth going through insurance. The Falcones, for example, chose to pay the $500 cost of getting a crew in to clean up the mess out of pocket, rather than pay their deductible.

In more extreme cases, however, having insurance is a must.

"We had a situation a couple months ago where a big black locust fell on a house in Toronto. And that job, with the crane, came in at over $25,000," Gordon said.

Sometimes, the offending tree comes from a neighbouring property, which can be a source of confusion. But Rob de Pruis, director of consumer and industry relations with the Insurance Bureau of Canada, said the homeowner whose property was affected should be the one to call their insurance company -- even if it was their neighbour's tree that fell.

De Pruis said the homeowner's insurance company will be the one to pay for the damage, though it may explore avenues for recovery if it feels the other party -- the owner of the tree -- has been negligent.

There are cases where a tree owner could be found liable for damages, such as if a neighbour repeatedly expressed concerns about a rotten or damaged tree and the tree owner chose to do nothing about it. But those cases are rare, de Pruis said.

"If there was a strong wind storm and it uprooted the tree, you as the tree owner didn't do anything wrong," de Pruis said. "So don't voluntarily accept liability."

Given that a fallen tree has the potential to be a dangerous hazard as well as a costly nuisance, Gordon said it's wise to choose prevention whenever possible.

"It's worth your while to have a tree company come in, do a walk-around, and make recommendations for pruning," Gordon said. "Because a lot of times, failures in the trees happen because of structural problems that could have been corrected at an earlier stage."

For her part, Falcone said she and her husband are debating whether their troublesome maple tree might have to come down.

"We don't want to, but we may have to consider it," she said. "Up to now, the damage hasn't been extensive, but who knows what the future could bring?"