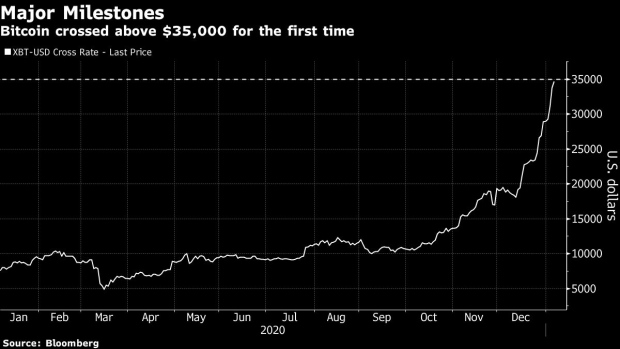 (Bloomberg) -- Bill Miller says the surge of attention generated by Bitcoin’s frenzied rally could ignite further gains by encouraging corporate treasurers to use the cryptocurrency for diversification.

“If inflation picks up, or even if it doesn’t, and more companies decide to diversify some small portion of their cash balances into Bitcoin instead of cash, then the current relative trickle into Bitcoin would become a torrent,” Miller of Miller Value Partners LLC wrote in a blog post published Jan. 5.

Miller joins a growing but still small chorus of names suggesting Bitcoin could be a part of corporate treasuries, something a handful of companies have already taken up. MicroStrategy Inc.’s Michael Saylor set the trend off last year when he said the Federal Reserve’s relaxing of its inflation policy helped convince him to invest the enterprise-software maker’s cash into Bitcoin. Long-time crypto advocate Jack Dorsey’s Square Inc. has put about $50 million in Bitcoin.

ICYMI: Michael Saylor, the CEO Who Turned a Software Company Into a Bitcoin Company

The statement of support for Bitcoin is not the first by Miller, who is best known for his value stock picks at Legg Mason Inc., where he outperformed the S&P 500 for 15 years through 2005. He has been a fan of Bitcoin since 2014, saying back then that he owned the coin through his personal investments.

“Warren Buffett famously called Bitcoin ‘rat poison,’” Miller wrote in his post. “He may well be right. Bitcoin could be rat poison, and the rat could be cash.”