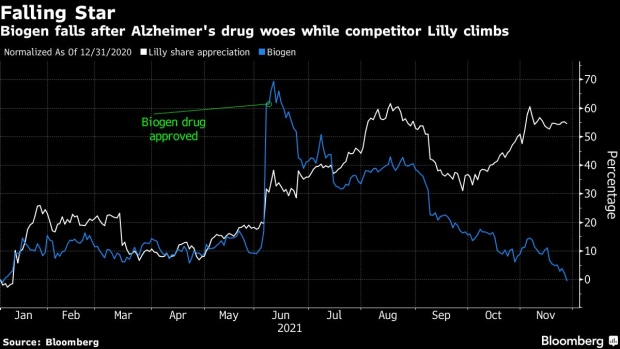 (Bloomberg) -- Biogen Inc. tumbled on Friday as setbacks for its Alzheimer’s disease drug Aduhelm helped erase all the gains the stock had made in 2021.

The biotech stock has plunged more than 40% after reaching a six-year high in June, when Aduhelm was approved. The decline has wiped out more than $26 billion in Biogen’s market value. On Friday, it sank 2.9% amid a broader market selloff over concerns surrounding a new Covid variant.

A congressional inquiry questioned the Food and Drug Administration’s approval of the first new medicine for the brain-wasting disease in over a decade. Insurers have pushed back at paying for the $56,000-a-year drug, and earlier this week, new details on a brain-swelling side effect following a patient death fueled further declines in the stock.

A proposed decision on Medicare coverage for Aduhelm is expected early next year, with a final ruling in April. As many Alzheimer’s patients are covered by the government-backed program, that decision will mean even more to Biogen’s sales than the recent pushback from private payers.

The threat of competition has also weighed on Biogen. Eli Lilly & Co. began a rolling submission for its competing Alzheimer’s drug, donanemab, in October and expects an approval could come in the latter half of 2022. Lilly has rallied more than 54%, while Biogen is now down for the year.