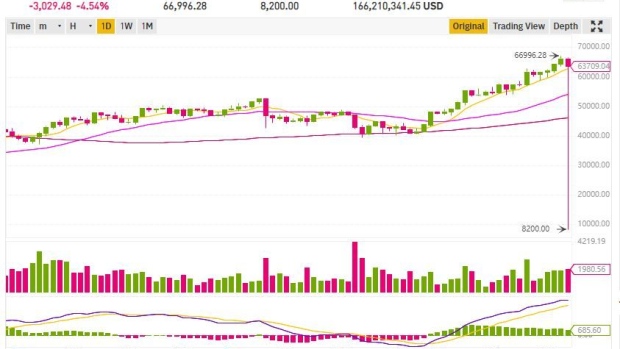 (Bloomberg) -- Another day, another major snafu in cryptocurrency trading.

The price of Bitcoin appeared to rapidly -- and only temporarily -- plunge about 87% on Binance’s U.S. exchange Thursday morning, sinking to as low as $8,200 from around $65,000. The price did nothing like that on other venues, and on Binance the level almost immediately snapped back to where it had been.

The plunge occurred at 7:34 a.m. New York time, according to Binance’s website. Volume on the exchange in that minute was 592.8 Bitcoins, which are worth just shy of $40 million at current prevailing prices.

Mistakes like this happen throughout finance when, for instance, traders mess up details of their intended trades, entering the wrong price or order size. An erroneously large trade, as one example, can overwhelm an exchange’s order book, leading to a quick and massive decline. The entire U.S. stock market famously flash crashed back in May 2010, though equities have mostly avoided trouble since that era.

Binance didn’t immediately respond to a request for comment on what happened.

This is the latest in a string of recent high-profile trading problems in crypto. Synthetify, a new decentralized exchange, was forced to shut down for a while earlier this month shortly after its debut because of bad data provided by the Pyth Network, a price feed backed by some of the world’s most well-known trading and exchange firms. Pyth malfunctioned another time in September, erroneously making it appear that Bitcoin had crashed 90%.