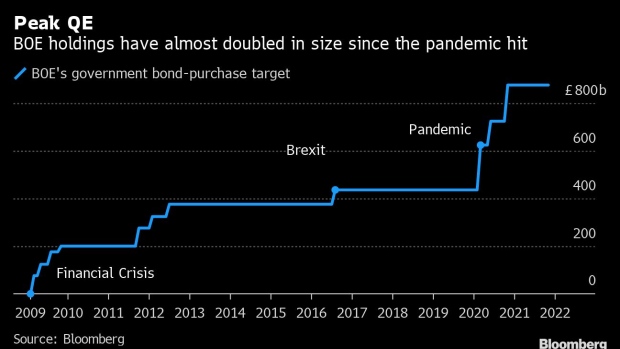 Pedestrians pass the Bank of England in the City of London, U.K., on Monday, Dec. 20, 2021. The emergence of the omicron variant, just as the coronavirus seemed to be receding into the rear-view mirror, has put much of the global return to the office on hold. Photographer: Jason Alden/Bloomberg , Bloomberg

(Bloomberg) -- Bank of England officials have largely decided to keep quiet in the run-up to February’s crunch meeting, allowing expectations to solidify for another interest rate increase.

Since the bank hiked rates in December, few of the nine-member Monetary Policy Committee have spoken, and none are scheduled to before their next meeting. That’s despite increasing market bets that another increase will come on Feb. 3.

The relative silence breaks from the effusive commentary made ahead of the November and December decisions. It also diverges from other central banks around the world, notably the U.S. Federal Reserve, which has stepped up hawkish rhetoric in response to inflation.

“What we are finding particularly intriguing at the moment is the stark contrast between members of the BOE’s Monetary Policy Committee and their peers over at the Fed, with the BOE contingent conspicuous in their silence,” Gary Kirk, a partner at TwentyFour Asset Management wrote last week. “This appears to be deliberate and coordinated by those in Threadneedle Street.”

The December rate hike marked the BOE’s first increase since the start of the pandemic, but the decision next week is every bit as momentous.

Another hike would mark the first back-to back rate hikes since 2004. It could allow officials to begin paring back their 895 billion pound ($1.2 trillion) of bond holdings in March, the first decrease since quantitative easing started more than a decade ago.

In advance of the BOE’s two previous rate decisions, officials made a flurry of appearances, giving at least 10 meaningful comments about policy and the economy. Those regularly swung market expectations.

Since then, there has only been one official speech on policy -- from Catherine Mann on Jan. 21. Governor Andrew Bailey and his deputy Jon Cunliffe testified in Parliament on Jan. 19 mainly about financial stability matters, speaking generally about the risks of inflation taking off. Mann talked mainly about international issues in a number of other panels she did early this month.

Both of the BOE’s previous meetings delivered an outcome that wrong-footed investors, prompting strong criticism of the bank.

This time, officials seem to be allowing economic data to do the talking. Those readings point toward an urgent need for action, with inflation accelerating to the highest in three decades and solid growth in the labor market underpinning wage gains.

Crucially, the omicron variant of the coronavirus has proved more benign. There’s been fewer restrictions than many feared last month, and the government is starting to loosen those rules. That’s bolstered views that any slowdown in activity will be short lived, with a strong recovery likely to follow.

“The case for the Bank of England to raise interest rates at its first meeting of 2022 has strengthened considerably of late. We now expect the Monetary Policy Committee to lift rates by 25bps to 0.5% in February, three months earlier than previously forecast.”

Keeping quiet makes good on Bailey’s assertions last year that it wasn’t the BOE’s job to guide financial markets on interest rates and that officials would offer less hard guidance in future.

The limited remarks that have emerged have been hawkish in nature, albeit with little direct focus on February. With the BOE now in a pre-meeting quiet period, further comments would be unusual. None are scheduled until the decision is announced on Feb. 3.

Against that back drop bets on a February move have remained rock solid, with investors now pricing in around a 90% chance of a move. The lack of push back from officials means a failure to deliver on Feb. 3 is likely to further sour the strained relationship between the BOE and financial markets.