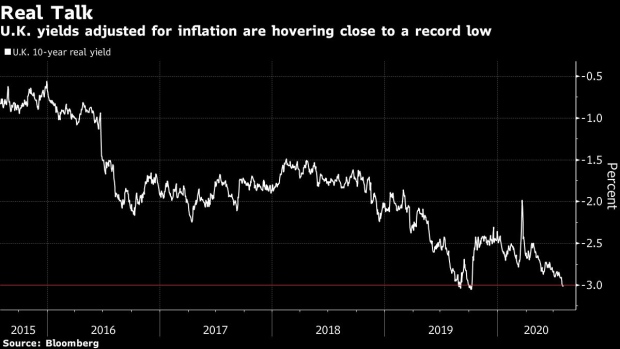 The Bank of England (BOE) stands in the City of London, U.K., on Wednesday, May 6, 2020. Bank of England policy makers will meet this week knowing that they'll probably have to do more to combat the U.K.’s economic slump, if not now then soon. , Bloomberg

(Bloomberg) -- The U.K. bond market is flashing warning signals to Bank of England Governor Andrew Bailey ahead of the central bank’s meeting next week.

While traders don’t expect the BOE to alter monetary policy Thursday, bets on easier funding conditions are building. Yields out to eight years are submerged below 0%, a sign the market expects interest rates to soon follow, according to Luke Hickmore, a money manager at Aberdeen Standard Investments.

At the same time real yields, which strip out inflation, are hovering just above record lows. That’s putting strain on savers and pension funds, while inflation expectations are rising even as the country grapples with a recession. Throw in a rise in coronavirus cases and the end of the Brexit transition period on Dec. 31, and Bailey faces an unenviable problem of how to best support the economy.

“It’s not the sort of headache where an aspirin and a dark room will help,” said Hickmore, who prefers buying Canadian, Australian and U.S. debt. “The market has now boxed in the BOE.”

Traders in money markets are pricing in a 10-basis-point interest-rate cut to 0% by March, with BOE officials careful not to rule out a move into sub-zero territory. HSBC Holdings Plc’s Steven Major said the BOE could rely on the rhetoric of negative interest rates, without having to actually do so, something he termed the “Maradona effect.”

Citigroup Inc. argues the BOE could pave the way for negative territory by removing the guidance that the lower bound is “close to, but a little above, zero” at its decision. Ten-year yields will likely touch 0.05%, with sub-zero rates “increasingly likely,” the bank said in a client note. They were at around 0.07% Friday, with equivalent real yields hovering at minus 3%.

Investors will also pay attention to Bailey’s economic outlook, given coronavirus cases are picking up across the continent. More than 4 million people across a large part of northern England must now comply with tighter lockdown rules.

The Monetary Policy Committee “will be debating whether the recovery is V-shaped or turning pear-shaped,” Jamie Searle, a strategist at Citigroup, wrote in a note to clients. Ten-year gilts “have likely not yet seen the low in yield.”

Euro-area bond sales are scheduled from Austria, Germany, France and Spain and should total around 16 billion euros ($19 billion), according to Commerzbank AG. The U.K. will sell 2026 and 2041 bonds on Tuesday, then 2030 bonds and 2048 inflation-linked debt on Wednesday.