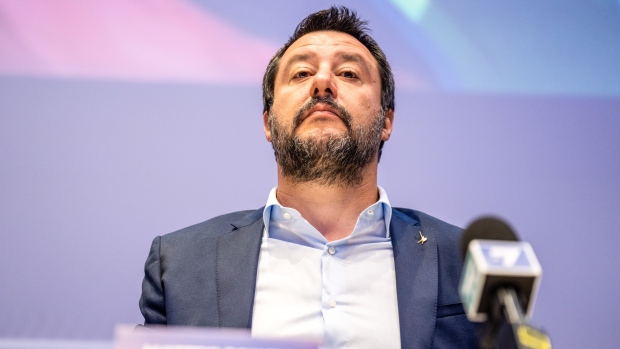 (Bloomberg) -- Matteo Salvini owes financial markets a favor. The head of Italy’s right-wing League is on a collision course with the European Union, but bond investors are still enthusiastically buying the country’s debt and giving him room to pursue his crusade to cut taxes.

As the European Commission moves toward opening an infringement procedure against Italy for failing to rein in debt, market pressure on the populist government has eased amid a successful bond sale as well as the administration’s pledges to reach a compromise.

While last year’s budget battle with Brussels sent Italy’s 10-year bond yield spread over Germany to highs last seen during the euro-area debt crisis, the market reaction to the latest threat of punishment has been tepid. Italian bonds have rallied in recent weeks, helped by the prospect of more monetary support from the European Central Bank.

“The recent changes in Italian sovereign yields suggest investors are giving the populist government the benefit of the doubt that it will eventually find some way to curtail spending. But funders will eventually want concrete proof, such as in the budget plans for next year, scheduled to be published in October.”

In Brussels, the European Commission isn’t focusing on the markets, but on corrective measures it wants to see Italy take -- failing which, the bloc is expected to trigger a formal disciplinary procedure soon.

Italy’s Treasury took advantage of the low-yield environment to sell 6 billion euros of 20-year bonds via a syndication Wednesday, receiving four times the number of orders.

Ten-year yields are now hovering at about 2.40%, a level last seen before the populist coalition was formed in June of last year, and well below the 3.81% level seen in October. The spread over similar-dated yields on German bonds, a key gauge of risk in the country, remains elevated at 266 basis points, having touched a one-month low on Tuesday.

A threshold of 400 basis points has been widely touted as the level at which the government could collapse. Salvini once ridiculed the spread as something he has for breakfast.

“Italy is caught between the contradictory push-and-pull of negative fundamentals and political concerns on the one side, and the siren-call of positive carry and financial repression on the other,” said Richard McGuire, head of rates strategy at Rabobank International.

“When the 10-year spread gets toward 280 basis points, it’s simply too good an opportunity to miss despite the riskiness inherent in Italy,” McGuire added.

“In a world where the U.S. Treasuries are structurally compressing and the three most important global central banks have an easing bias, it is practically impossible for the Italian bonds to sell off to the extent that it would seriously harm the economy or its financial structure,” Tenconi said. “In any case, any sell-off is a buy opportunity for investors.”

Pierre Moscovici, EU Commissioner for Economic and Financial Affairs, reminded the Rome government that Brussels is waiting to hear more.

“We stand ready to take into account any new elements that Italy may put forward, but let’s not waste time,” Moscovici told reporters in Brussels on Wednesday. “The ball is in Italy’s court.”

The Commission needs to see a “credible path for 2019 and 2020,” the commissioner added. “No one should be in doubt that we will apply those rules if the criteria are not fulfilled.”

--With assistance from Lorenzo Totaro, Viktoria Dendrinou and Nikos Chrysoloras.

To contact the editors responsible for this story: Ben Sills at bsills@bloomberg.net, Dan Liefgreen, Jerrold Colten