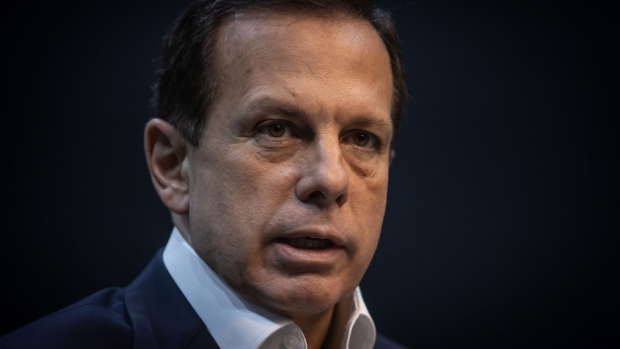 Joao Doria, presidential candidate for the Brazilian Social Democracy Party (PSDB), speaks during an interview in Sao Paulo, Brazil, on Tuesday, Dec. 14, 2021. Doria, a long-time businessman turned politician who runs Brazil's richest state, said Sao Paulo's fast economic recovery will help him bolster his credentials with voters next year in a presidential race that so far sees him polling far below the front-runners. , Bloomberg

(Bloomberg) -- Former Sao Paulo Governor Joao Doria, who’s been polling at a distant fourth place in Brazil’s presidential race, withdrew his candidacy after being pressured by his own party to do so.

“I leave the race with my feelings hurt but a light heart,” Doria said at a news conference on Monday. “Today I understand I’m not the choice of the party’s leadership. I accept that fact and leave with my head held high.”

Doria’s departure paves the way for his Brazilian Social Democracy Party to join forces with two other centrist parties and rally behind Senator Simone Tebet, who they believe has bigger chances to challenge the two front-runners: leftist former president Luiz Inacio Lula da Silva and Jair Bolsonaro, the right-wing incumbent.

The latest Ipespe poll published last week showed Doria with 4% of voting intention and Tebet with 2%. Lula and Bolsonaro lead the race with 44% and 32%, respectively. Brazilians will choose their president in October.