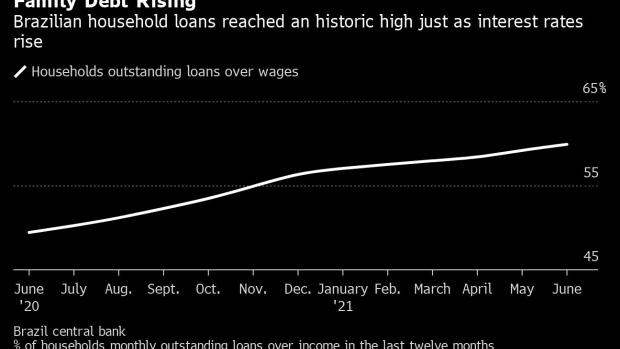 People wearing protective masks walk through a market in Sao Paulo, Brazil, on Thursday, July 30, 2020. Brazil added 69,074 cases on Wednesday, pushing the total number of infections to over 2.55 million, according to the Health Ministry. , Bloomberg

Outstanding household debt reached 59.9% of total wages in June, the highest level since data started being published by the central bank in 2005. The total debt, ranging from short-term credit card loans to mortgages, increased by 10.6% from a year ago, the bank said on Monday.

Rising demand for credit has so far been met by financial institutions, with credit card payments and loans to buy cars rising the most.

“We remain concerned that the high level of indebtedness could weigh on households’ balance sheets and affect the pace of domestic demand ahead, especially given the expected tightening of monetary policy,” economist Cristiano Souza wrote in a research report. Improvements in the labor market could help mitigate the impact on economic activity, he said.

An increase in jobs creation -- thanks to a accelerating vaccination campaign against Covid-19 -- has so far helped to keep monthly expenses for the payment of loans at a stable level near 30%, according to central bank’s Rocha.

Policy makers led by Roberto Campos Neto have lifted the benchmark Selic rate by 425 basis points since March to battle inflation that’s running at more than 10% per year. The central bank considered average interest rates, which rose to 29.9% in August, “in line” with the current tightening of monetary policy.